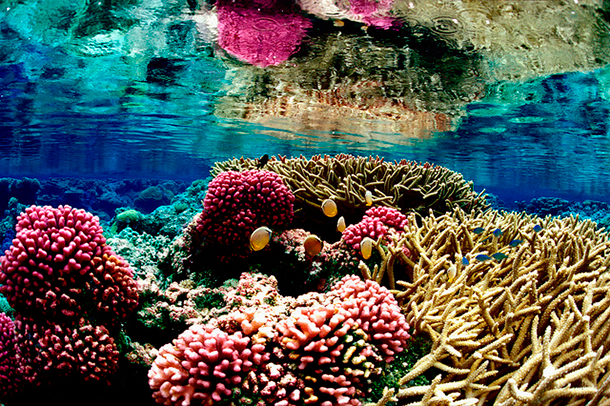 Researchers have discovered a new species of algae that can survive higher ocean temperatures. Corals depend on the symbiotic relationship to survive. In turn, this enables the coral host to withstand warmer waters as well. (Photo: USFWS Pacific; Flickr CC BY 2.0)

Coral reefs are a delicate ecosystem. Their health largely relies on the symbiotic relationship between algae and corals, which typically breaks down in warmer water. But as Jörg Wiedenmann, Professor and Head of University of Southampton’s Coral Reef Laboratory, tells host Steve Curwood, a new species of algae is allowing corals in the Persian Gulf to withstand rising ocean temperatures.

CURWOOD: From PRI, this is an encore edition of Living on Earth. I’m Steve Curwood. Today we have some good news, as well as some bad and definitely ugly, and it all has to do with algae—sort of. So let’s start with the good, and it’s good news for coral reefs, which are in trouble in many spots around the world. Overfishing and pollution aren’t helping, but the big challenge seems to be shifting water temperatures, which can drive out the algae that reefs depend on for food from photosynthesis, leaving the reefs unhealthy or dead and bleached a ghostly white. Now science has discovered a species of algae in the Persian Gulf that doesn’t seem to mind high or low ocean temperatures. Jorg Wiedenmann of the University of Southampton was part of the team that made the discovery.

WIEDENMANN: Hi there, it's a pleasure to be here. 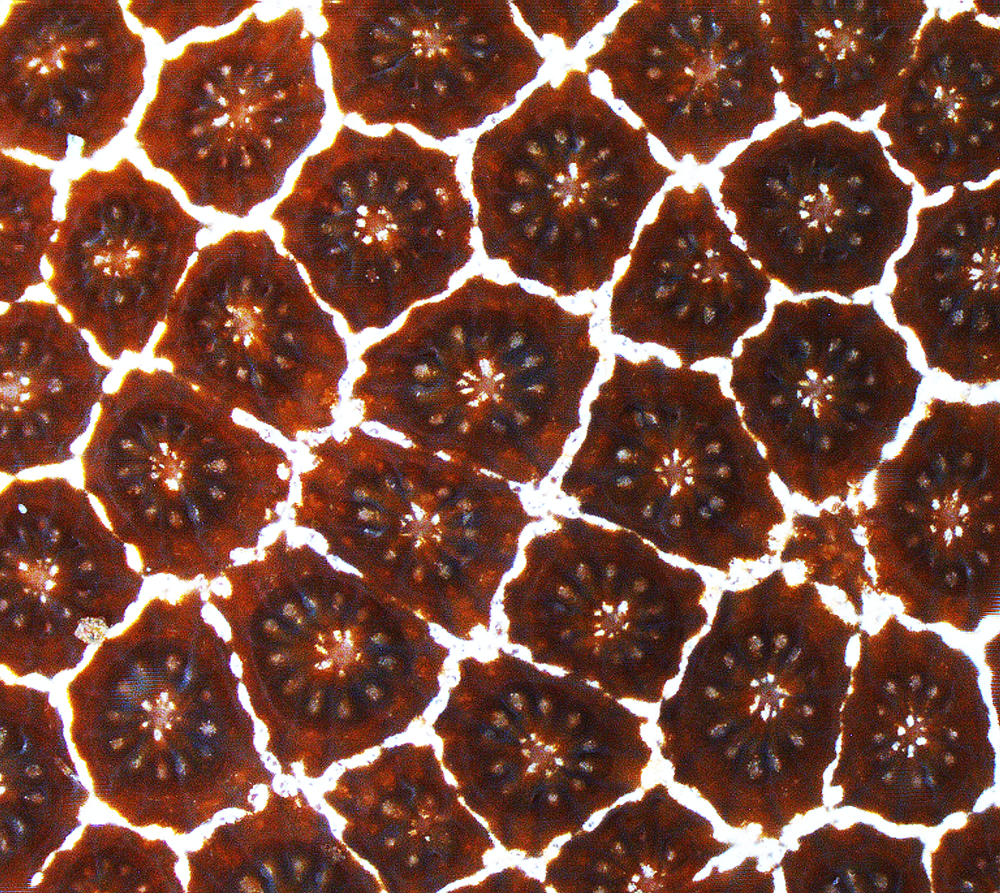 Some types of algae live symbiotically inside a coral host, photosynthesizing to feed the coral sugars and receiving shelter and nutrients in return. (Photo: Jörg Wiedenmann, J. Burt, C. D’Angelo)

CURWOOD: So, first of all, why study corals in the Persian Gulf? What's unique about that region?

WIEDENMANN: The Persian Gulf is actually a wonderful natural laboratory because they are experiencing temperatures, which are predicted for other parts of the world for the next century. So, if we want to get a better idea of what will be going on in other oceans, the Persian Gulf might be telling us already the future since the corals are experiencing heat already there.

CURWOOD: Now, why is it that warmer than average ocean temperatures typically are a problem for corals as a result of bleaching.

WIEDENMANN: So corals live together in a symbiotic relationship with this unicellular algae and they depend on their algal symbiont because they provide them with valuable nutrients and food. However, this symbiotic relationships is very honorable and if temperatures exceed a certain threshold the algae for the photosynthesis is not working properly anymore and they produce some toxic compounds which results in a breakdown of symbiotic relationship and the algae are lost from the coral. So, as a consequence the white skeleton of the animal close to the coral is shining through the tissue and that gives these corals the bleached appearance and that is actually a signal that they are severely stressed, that they have lost their symbiotic partner and as a consequence they might actually die if they do not manage to recover in this environment. 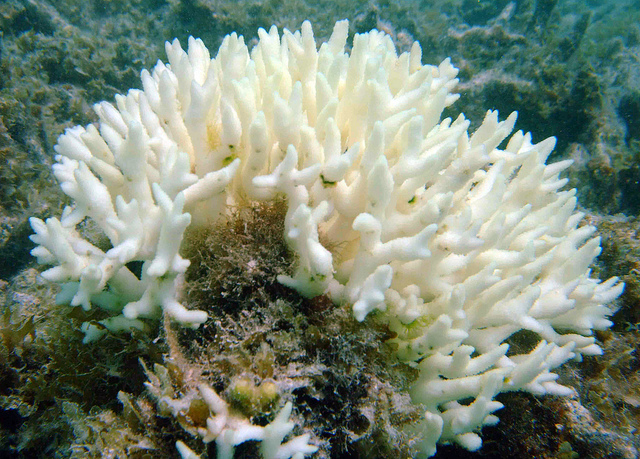 CURWOOD: But you found this particular alga that can survive warm temperatures, at least greater temperature fluctuations than species known to be outside the gulf. How is this alga able to do that?

WIEDENMANN: At the moment we don't know yet how they manage to do it. The only thing that we know now and this is very exciting, that this is very new type of algae and obviously this algae is doing something very different from the algae in other parts of the world, and our future research will hopefully help find out what mechanism is by which they manage to survive these extreme temperatures.

CURWOOD: What's a potential for this particular species of algae to live symbiotically with other coral species in other places, maybe places that are under stress because of warming ocean temperatures? 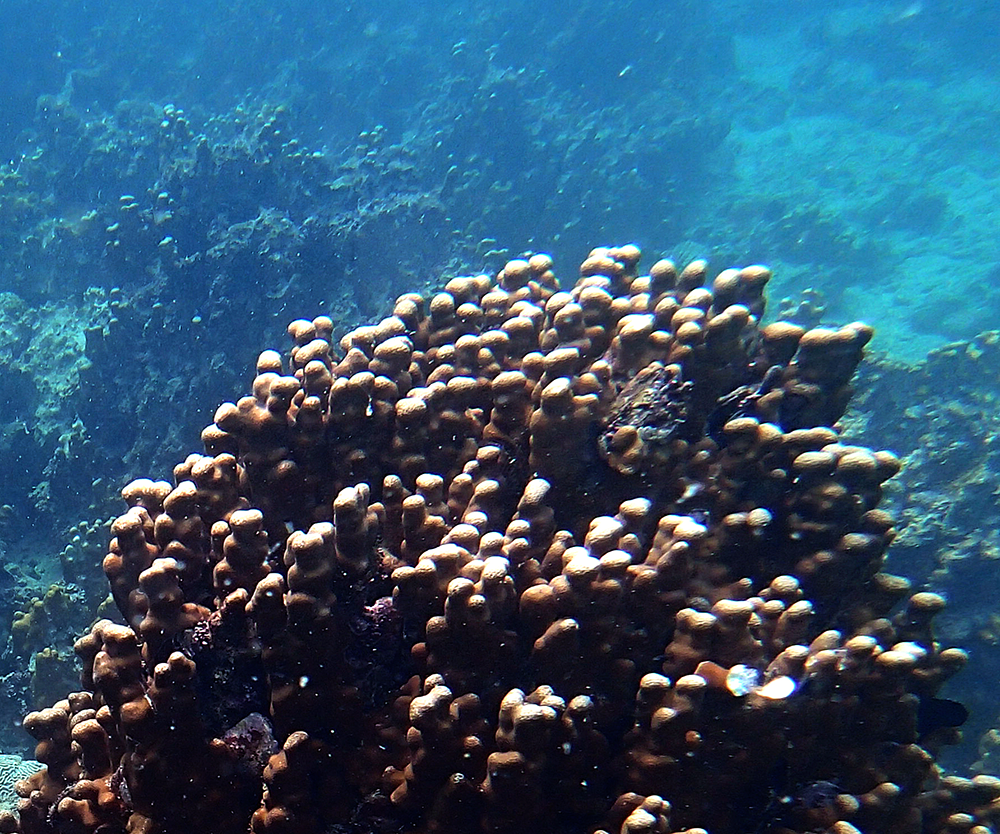 The algae living symbiotically inside corals give their hosts a brown color, seen here in a coral of the Porites genus in an Abu Dhabi reef. (Photo: Jörg Wiedenmann, J. Burt, C. D’Angelo)

WIEDENMANN: Well, so the exciting finding about that is that corals obviously have more means to adjust to high temperatures than we previously thought. In the past it was just one strain of algae, which was made mostly responsible for thermal tolerance in corals and now we certainly know that there are even different species, which could do that. So that means that the diversity of algae out there that could actually help corals to survive in extreme temperatures might be much bigger than we had previously thought. And when temperatures are rising in other parts of the ocean these algae actually might take over and help the corals to become more temperature tolerant. However, while this gives hope that corals will adjust to the increasing temperatures of the future, one also needs to be realistic about that and if we look at the Persian Gulf so we find there are about 68 coral species that can endure in these high-temperature environments. If you look in a more normal tropical environment in the Indo-Pacific, the hotspot of coral diversity, you would find about 600 species. So obviously, there are limitations to the adaptation potential of corals to these extreme temperatures. It does not mean that rising ocean temperatures are nothing bad for corals because they cannot acclimate to a certain extent. 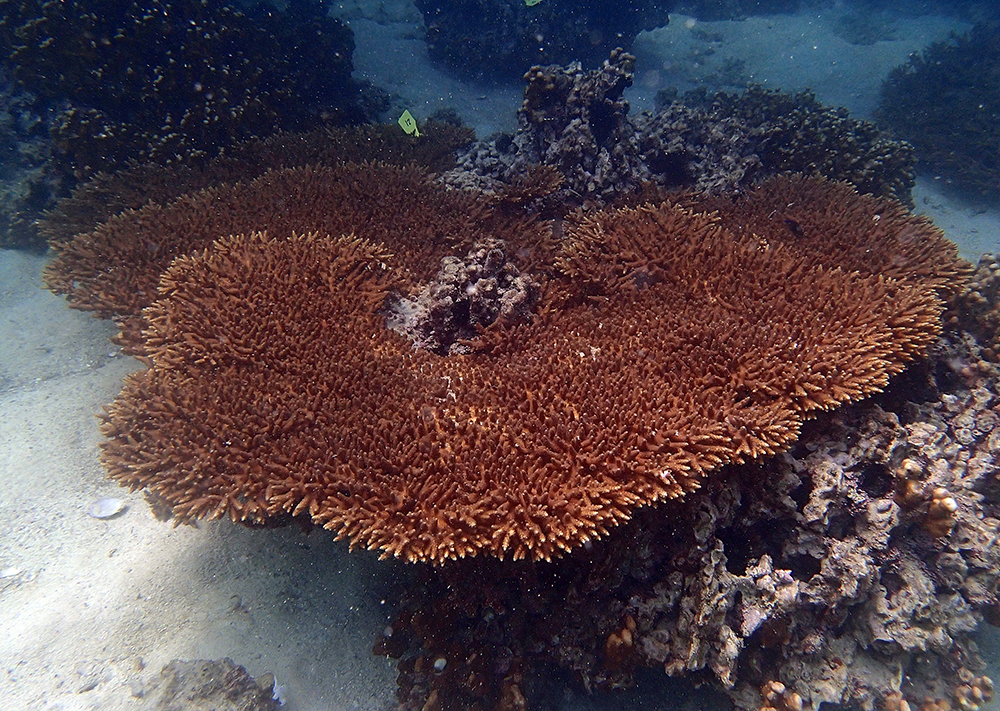 CURWOOD: In your work what other stressors do you see besides heat that threaten coral reefs?

WIEDENMANN: Water quality plays a crucial role for coral survival and our recent work has shown that for example, nutrient enrichment of waters, which corals receive can actually lower the temperature tolerance. The temperature threshold at which corals can start to bleach and start to suffer is actually lowered. So this is something very important because that also gives possibilities to really actively promote coral reefs to become more resilient towards temperature increases. If we managed to get the water quality right in coral reefs then they are actually are more resilient towards temperature stress. 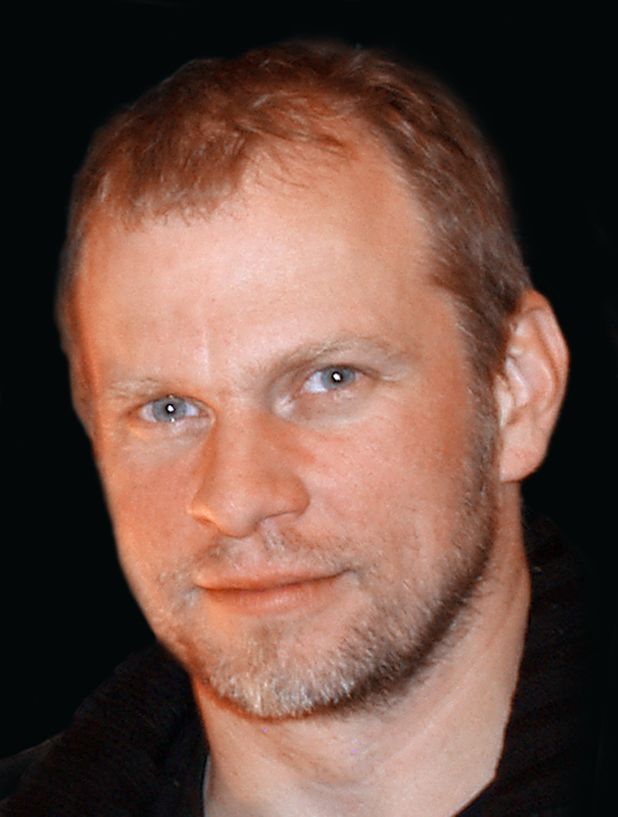 Jörg Wiedenmann is a professor of biological oceanography and head of the coral reef laboratory at the University of Southampton. (Photo: courtesy of Jörg Wiedenmann)

WIEDENMANN: So, what we can see is that coral reefs are by no way doomed, so corals try to fight back and they try to adjust to the changing environment and they have a higher capacity to do so then we had previously thought, but the important message is that this will not be enough. We need to support coral reef ecosystems in their struggle to adjust to higher temperatures and reduce the pollution of the waters, reduce overfishing and to keep them in natural and good health.

CURWOOD: Jorg Wiedenmann is a Professor of Biological Oceanography and head of the Coral Reef Laboratory at the University of Southampton. Thanks so much for taking the time with us today.

WIEDENMANN: Thank you very much for talking. It was great fun.


The paper in the journal Nature

“Newly Discovered Algae Could Save World’s Coral From Climate Change”

The Coral Reef Laboratory at the University of Southampton