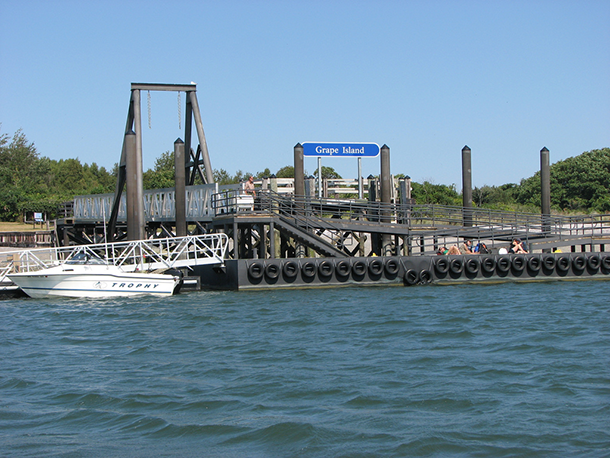 Boston’s Harbor Islands offer a scenic retreat from the bustle of the city, but they’re vulnerable to inundation by invasive plant species. Living on Earth’s Olivia Powers visited Grape Island on a “Stewardship Saturday” to watch volunteers both young and old help root out invasive buckthorn and other alien plants.

POWERS: It’s 9 a.m. on a Saturday, but the sun is already hot over the Boston Harbor Islands. A dozen or so volunteers clamber off a boat onto Grape Island. It’s one of the least developed of the harbor islands, with lush vegetation, hiking trails, and campsites, infamously called Tick Island by locals. The park rangers break out heavy-duty cans of bug spray and pass them around as volunteers tuck their pants into their socks. 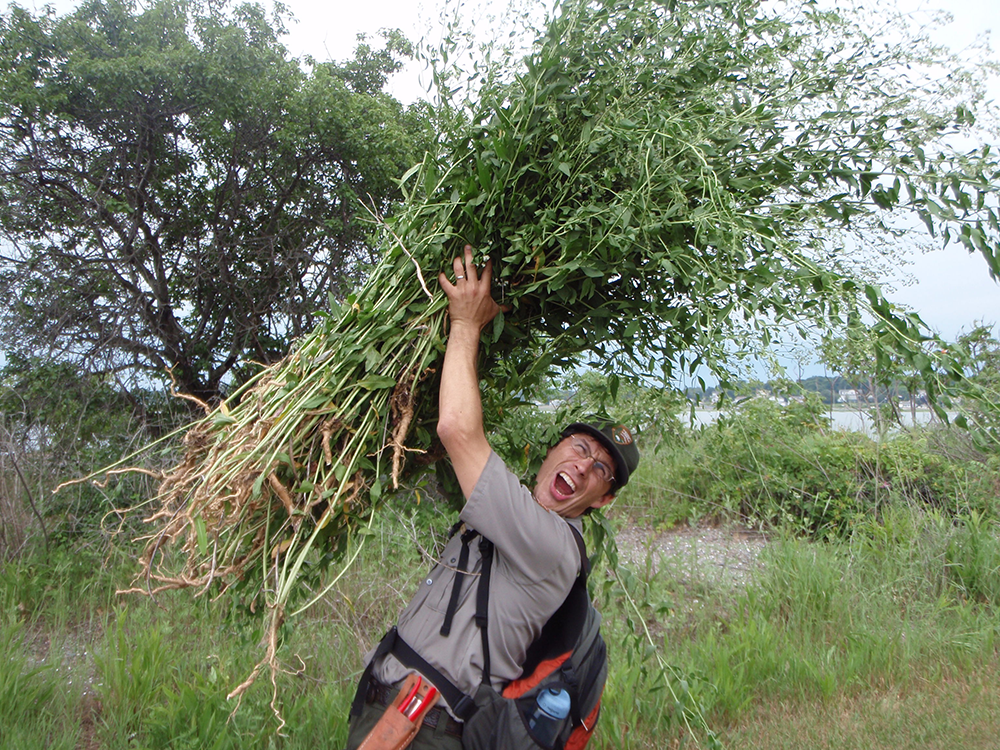 ALBERT: The Stewardship Saturday program got started about 10 years ago now.

POWERS: That’s Marc Albert, the director of the program.

ALBERT: Other park managers and I wanted to offer the public an opportunity to sort of be hands on with helping to take care of the park.

POWERS: The program ferries volunteers out to a different island each Saturday to pull up the invasive species that are crowding out native vegetation.

ALBERT: There’s a lot of invasive species that have changed the ecosystems in a way that we end up with sort of the same mix of invasive species here in the Boston Harbor Islands that you might find in a park outside of Philadelphia or even further to the west and south of here.

POWERS: Albert says that when invasive species move in they threaten ecosystems and destroy biodiversity. And that’s not all that’s lost.

ALBERT: Part of what we’re responsible to do in the National Park Service is to preserve the connections to the past, to help tell the stories of people and how they’ve interacted with places overtime. Probably our signature native species here is staghorn sumac. Native Americans utilized staghorn sumac for millennia here in the harbor islands. And without the staghorn sumac being present it’s hard to feel and understand the deep history of this place. 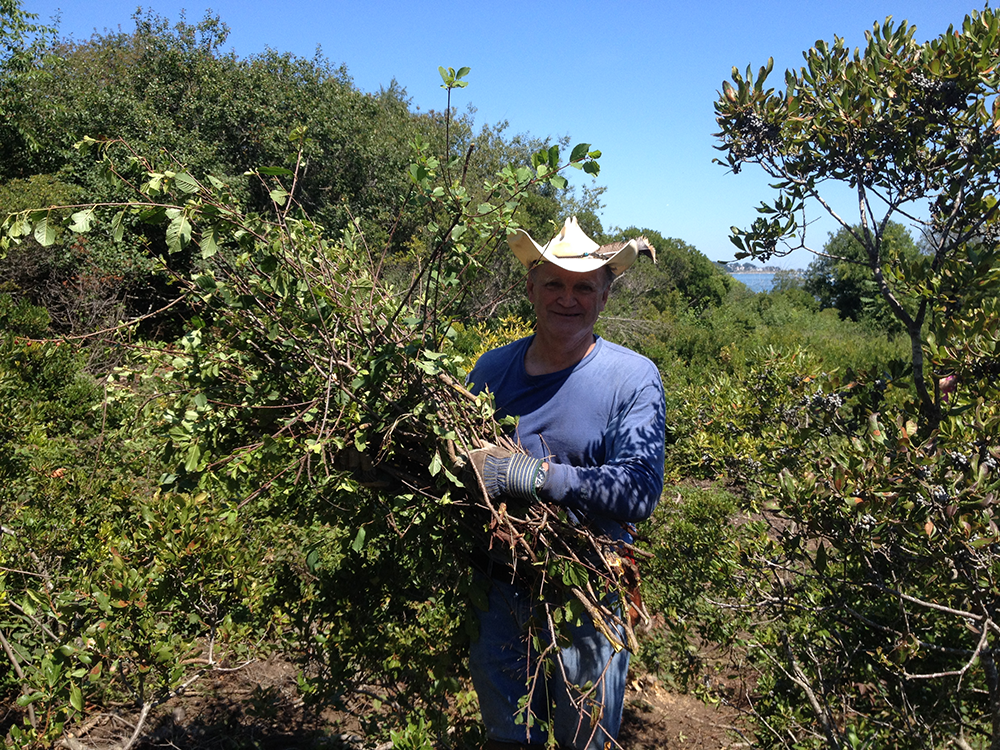 POWERS: Historically, Native Americans soaked the plant’s fuzzy red berries to make a lemon-flavored tea, and dried its leaves to extend their tobacco. Albert says that pulling out the plants that have taken over will help the staghorn sumac return to the islands.

ALBERT: On Grape Island in particular we’ve been working on removing invasive species that are threatening some of the wetland habitats there, and some of the species that occur really throughout the park, such as glossy buckthorn, honeysuckle, and multiflora rose.

POWERS: Today, the focus on the buckthorn, a viciously persistent shrub with small fruits and dark, oblong leaves. Meg is one of the volunteers.

MEG: The easy thing about the buckthorn that we’re pulling today is that the stem is very recognizable. So if you notice the brown stem with the white spots first, then you can double-check the leaves, make sure they’ve got the big veins. And then it’s a matter of tugging on it, trying to find where the root is, and then if you can team up with somebody to try to pull it out and try not to get all of the other plants that are in the area.

WATKINS: The little area that we’re standing in right now, we look around us today and we see a little bit of bare ground, and we see a lot of bayberry, which is a native plant to our island plus some berries. And we see we basically cleared this corridor, if you would, down to the water so that visitors to the island walking the path can actually see the water and see down, see what it may have looked like many, many years ago.

POWERS: A few of the volunteers are here for the first time, but most are old-timers like Ray, who return week after week to take care of the islands. 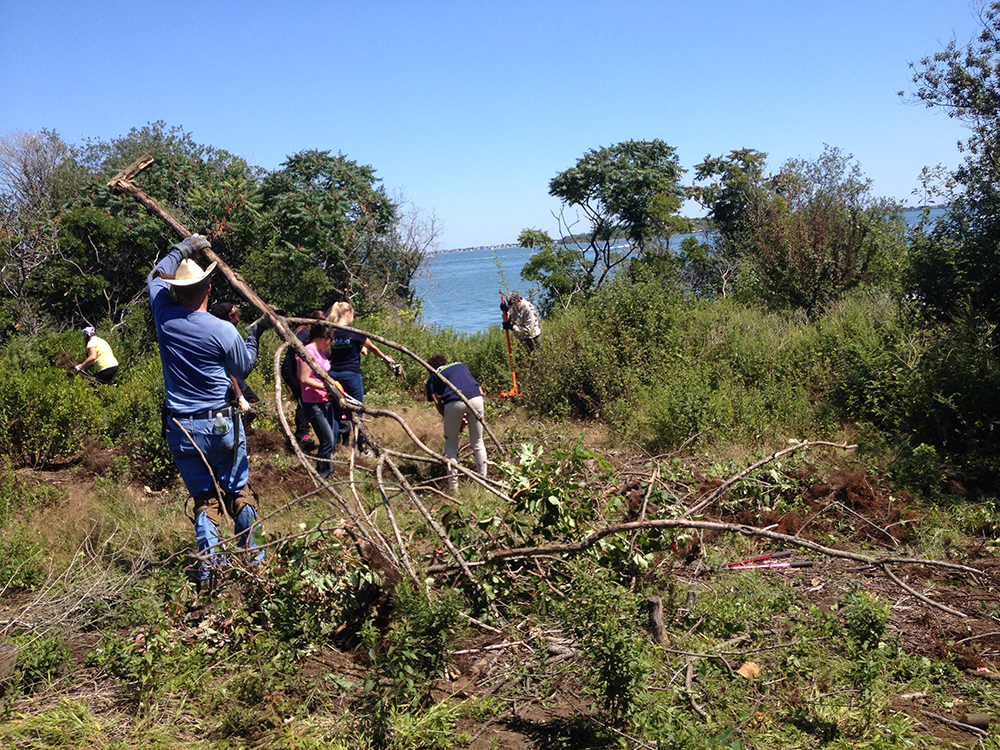 RAY: I started about nine years ago volunteering with the National Park Service, doing habitat restoration as we’re doing today. There’s a few of us who come out here every week and we strongly believe that we are making a difference.

POWERS: Nancy Faye is another regular. She says she’s lost count of how many times she’s been out on a Stewardship Saturday, but remembers what the islands looked like before volunteer restoration efforts began.

FAYE: I’ve been coming out here since I was a child. It was a way to get away from your parents and just go away for the day and do some adventure, because nobody was out here. It was just raw; it was empty. You would never see another person on any of the islands.

POWERS: The islands aren’t so empty now, but they still offer a refuge from Boston’s teeming streets and looming skyscrapers. And Nancy explains that introducing the city’s youngsters to this world on the harbor’s horizon is another of the program’s goals.

FAYE: I love the educational programs that they do for the kids to expose them to something new. It’s just, it’s so close to Boston and these kids never have an experience to do that.

POWERS: Today, some students from the New England Aquarium’s Live Blue Ambassador program join Nancy and the other volunteers. Here’s Hereesa, one of the high schoolers.

HEREESA: What we do is we focus on habitat restoration and also invasive monitoring. We distinguish, like, an invasive plant, we monitor where they’re growing, what sites they do, and kind of promote the native species to grow and flourish.

POWERS: After lunch, Hereesa and her fellow ambassadors head down to the shore to collect data on the marine life that lives on the ropes that hang off the docks. They’re led by Edgar, one of the park’s staff. 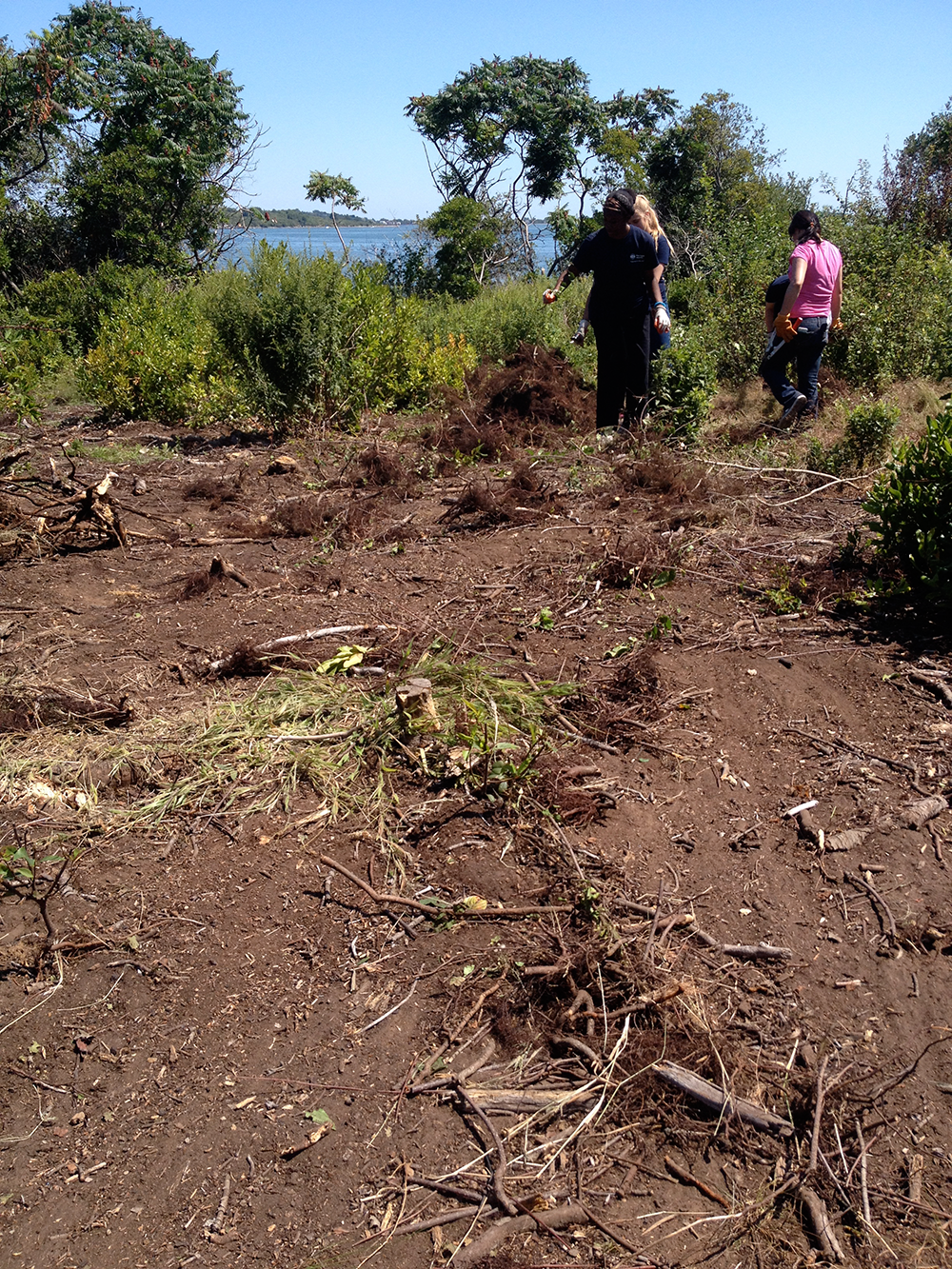 EDGAR: We have some ropes here, we’re gonna pull 'em up. These invasive species that we’re looking at are sessile invertebrates, so once they land after their larval form they stay where they are for life so we’ll be able to see if they’re present or not.

[STUDENTS TALKING ABOUT THEIR DISCOVERIES]

POWERS: The rope is covered in slimy sea creatures. The kids pluck them off and drop them in a small bucket. They pull out laminated charts and get to work identifying the different species. The information they gather is passed on to the Massachusetts Office of Coastal Zone Management, and will be used to help protect the harbor’s marine resources. Soon, the boat back to Boston pulls up to the dock. The students scramble to grab hold of the railing as the waves hit the dock. After a long day they are exhausted, but giddy, talking about next Saturday when they head to neighboring Bumpkin Island – and what it means to be part of a program working to protect their home. Here’s Hereesa again.

HEREESA: When I grow up I want to you know set an example, and also get out there. I don’t want to be just another person that’s walking on the Earth. I want to make a difference; I want to leave a mark.

POWERS: At least for now, Hereesa will leave her mark, if only on the Boston Harbor Islands, as the work of the Saturday Stewards becomes a new piece of the history that the landscape tells.

For Living on Earth, I’m Olivia Powers in the Boston Harbor.