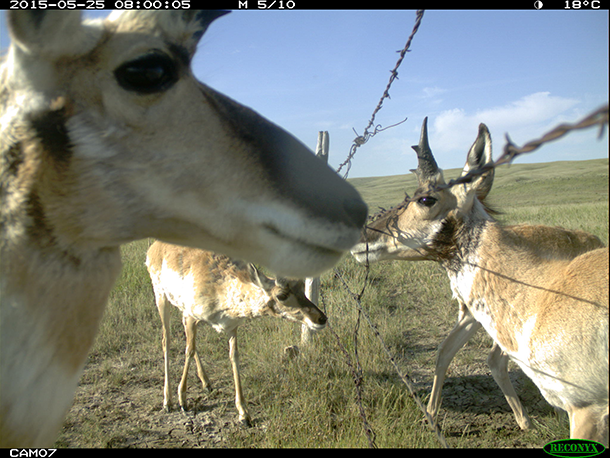 Barbed-wire fences are obstacles for pronghorn along their migration routes south. Some pronghorn will risk injury trying to get under the wire, while others will look for a way around. (Photo: courtesy of The Nature Conservancy of Montana)

For centuries, herds of pronghorn have traveled hundreds of miles across the west in the second longest land migration in North America. But now pronghorn often encounter barbed wire fences on private and public land that delay or halt their journey. Now, scientists and wildlife managers are developing fencing systems that allow the pronghorn to cross safely. Clay Scott reports from Montana.

CURWOOD: It's Living on Earth, I'm Steve Curwood. Well, the Americas have no true antelopes as classified by the zoologists, but just about everyone calls the indigenous pronghorn of North America an antelope as well. Pronghorn are graceful animals, smaller than deer, with distinctive white rumps and enormous eyes, found on sagebrush lands from northern Mexico to the southern edge of Alberta and Saskatchewan in Canada. The pronghorn are one of the fastest land animals on earth, reaching speeds close to sixty miles an hour, which helped them outrun ancient predators. But today the pronghorn has new challenges that its speed won’t help it overcome. Reporter Clay Scott has this story from the Montana-Saskatchewan border.

SCOTT: Pronghorn antelope are almost always on the move. If you watch a bunch of the stocky little gazelle-like animals long enough, you’ll see them fidget, and drift and mill about as they graze. They move longer distances as well. Some populations make annual migrations of 250 miles or more, as they trek from their fawning grounds in the north to their winter range, and back. The vast, open grasslands of the Canadian prairies mark the northernmost extent of that range. Don Gillespie is a cattle rancher in Saskatchewan, and he’s watched pronghorn his whole life.

GILLESPIE: Well I know when I was a kid it would be nothing to see three or four hundred antelope come down that migration trail that goes just east of my house, and we may have seen two or three herds a year. And they were everywhere, like we lived on ‘em, when I grew up, on antelope. That’s what we lived on. 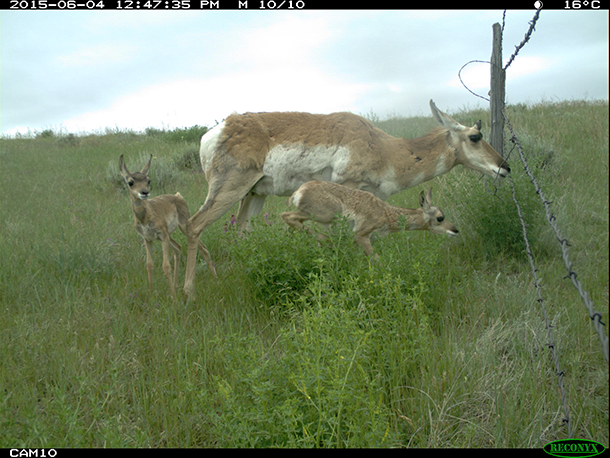 A female pronghorn and her young look for a way under a barbed-wire fence. (Photo: courtesy of The Nature Conservancy of Montana)

SCOTT: Don says he no longer hunts pronghorn, but he still observes them closely. Every spring and fall, he says, they follow the same well-worn path through his ranch, a path they’ve probably followed for centuries. But now, several barbed wire fences cross that route. In Saskatchewan, ranchers traditionally use only two or three strands of wire, and the antelope can easily slip under the fence. But there are many more fences in Alberta, Montana and elsewhere in the animals’ range, and they’re typically built with five or even six strands of barbed wire. And that’s a problem, because for all their phenomenal speed, pronghorn do not like to jump.

JAKES: I think the idea of jumping over a fence is something that’s learned. I don’t think -- they absolutely can jump and jump high, but I think they would rather go underneath.

SCOTT: Andrew Jakes has studied pronghorn antelope and their migrations for years. He’s a postdoctoral Fellow at the University of Montana.

JAKES: It’s just they’ve adapted to the tallest things in their landscape being a sagebrush. You know, so they, you know, it’s not in their genes, if you will, to jump. 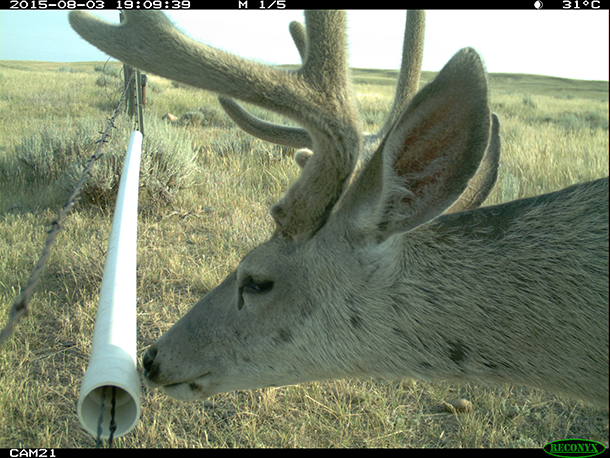 Mule deer can easily jump over fences, but this buck is curious about the fence modifications. (Photo: courtesy of The Nature Conservancy of Montana)

SCOTT: In the antelope populations Jakes has studied, – in Alberta, Montana and Saskatchewan – some individuals migrate and some stay put. He says that two-pronged strategy has helped the species survive. In their northern range, where the summers are fleeting and the winters harsh, the pronghorn need every advantage they can get. And that’s why the type of fencing the animals encounter on their migration is so critical. When a herd comes to a barbed wire fence with the lowest wire set too close to the ground, they’re forced to go along the fence – often for a mile or more – till they find a place where they can squeeze under it. The barbed wire tears their hair, exposing them to the cold. And those extra miles spent searching for a crossing add up over the course of a long migration. More miles equals more energy expended, and less time for eating. And on the northern prairies, that loss of valuable calories can be the difference between survival and starvation. Andrew Jakes has been looking for creative solutions to the fencing dilemma.

JAKES: There are thousands and thousands…hundreds of thousands of tons of fencing out on the landscape, so it’s really useful to try and identify priority areas to start doing conservation work, so we wanted to do something that was cost effective, that had buy-in from the landowners, and that would do the best by pronghorn. 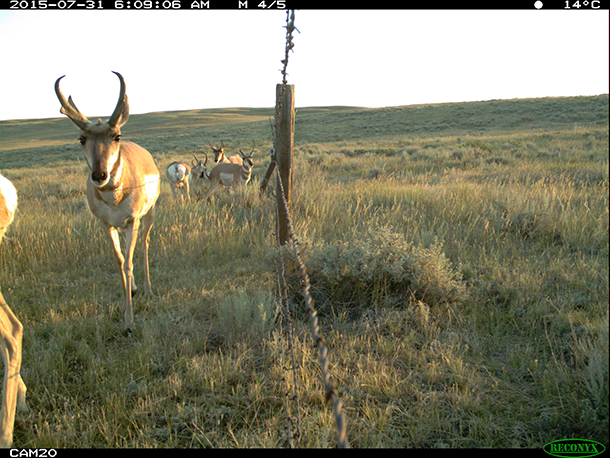 Some pronghorn will walk for a mile or more, looking for a place to cross a barbed-wire fence. (Photo: courtesy of The Nature Conservancy of Montana)

SCOTT: On the Matador Ranch in north-central Montana, Andrew Jakes has an experiment already underway.

SCOTT: On a windy afternoon on the Matador, biologist Brandon Nickerson drives me along a rutted dirt track through grasslands that extend for miles. He stops at a barbed wire fence. At first, it looks like any of the hundreds of similar fences in this country.

NICKERSON: For this modification it was randomly assigned a smooth wire. So basically all we’ve done is get this second-to-the-lowest wire moved up a bit to create space, and then put in this smooth wire here.

SCOTT: This innovative fence modification project was designed in part by Andrew Jakes, and carried out with the Alberta Conservation Association and the Nature Conservancy of Montana. The first step was to identify locations where pronghorn have historically crossed fences. Then researchers altered a 20 foot panel of fence adjacent to the crossing, in one of three ways: by replacing the bottom strand with smooth wire, by fixing the bottom two strands together with plastic piping, or simply by clipping the bottom strands together. The idea is to see if the pronghorn could be taught to use the modified crossings. At the Matador Ranch, Jakes and Nickerson have set up 16 such observation sites, monitored by cameras attached to fence posts.

NICKERSON: This up here is the illuminator, the infrared illuminator for at night. Then down here we have the motion sensor, and the camera lens is actually right here. 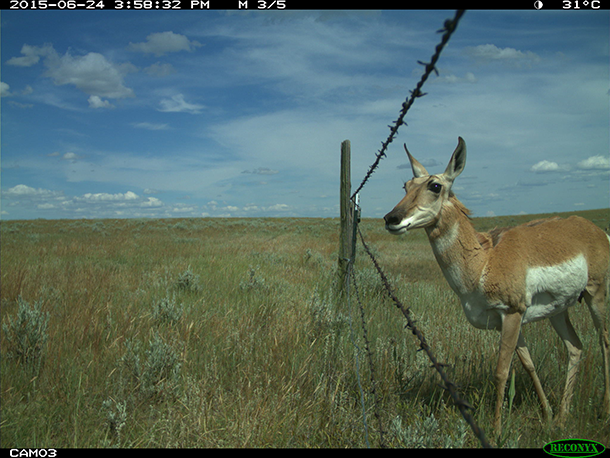 Some pronghorn face exhaustion and starvation while trying to find a way under or around a fence. (Photo: courtesy of The Nature Conservancy of Montana)

SCOTT: In the first few months of the Matador Ranch project, the cameras have produced thousands of shots: of owls perched on the fence posts, of mule deer jumping gracefully over the wires, of badgers and coyotes sliding under. Often the sensors have been triggered by nothing more than grass blowing in the nearly constant prairie wind. But the cameras have also captured many images of pronghorn antelope. Some of the animals seem to stare at the modified fence, unsure what to do. But others move easily under. The project is still in the data collection phase, and it’s far too early to draw any conclusions. Migration in pronghorn antelope, says Andrew Jakes, is a complex strategy. But knowledge of the migration routes, he says, is something that is learned and passed on from generation to generation. And he’s confident that the fence modification project can help this ancient and hardy North American animal learn new ways to negotiate the obstacles in its path, as it makes the annual trek through the prairies it’s inhabited for thousands of years.

For Living on Earth, I’m Clay Scott in northern Montana.


More about the pronghorn migration and wildlife friendly fences