Indigenous Peoples Fight for Their Rights at COP21 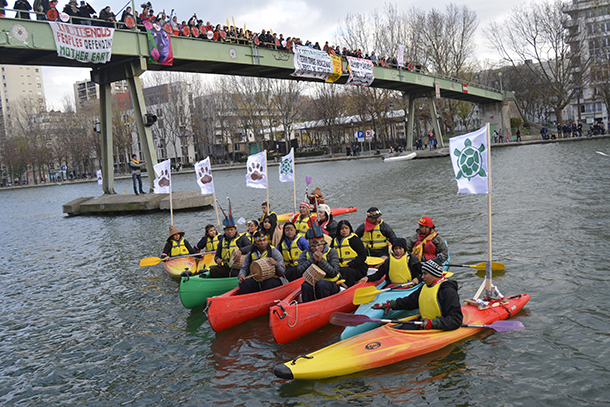 Indigenous nations and peoples from across the globe converged on Paris for the climate negotiations to demand climate justice and inclusion in the COP21 text. Climate change disproportionately affects indigenous people, and they believe that some climate solutions undermine their livelihoods and violate their rights. Living on Earth’s Emmett FitzGerald reports on indigenous demonstrations at the COP21 in Paris.

CURWOOD: It’s Living on Earth, I'm Steve Curwood in Paris. Indigenous peoples from around the world had a strong presence at COP21, with press conferences, panels, and protests demanding that indigenous rights be protected in any climate agreement. One unique display of indigenous unity and solidarity took place nowhere near the conference center where the talks were held. Living on Earth’s Emmett Fitzgerald has our story.

FITZGERALD: On a quiet Sunday morning in the heart of Paris, indigenous activists descended on the Bassin De La Villette, an artificial lake connected to the city’s canal system.

[CHANTING AND SOUND OF PADDLES]

FITZGERALD: About 50 people stood on a green footbridge bridge above the water, draping banners over the side that read “Indigenous Peoples Defending Mother Earth,” and “Defend the Sacred, Protect the Water.”

FITZGERALD: A green canoe led a flotilla of kayaks across the lake and under the bridge. Men beat drums from the bows of canoes. One blew on a horn, and the sounds floated out across the placid water.

FITZGERALD: The term ‘kayaktivist’ was coined this summer when protesters in kayaks blocked a Shell oil rig heading to the Arctic from Seattle. Some of those activists were from the Lummi nation in Washington State, and there were Lummi paddlers on the water in Paris as well.

MAN: We come from a great canoe nation. The water is our home. We came many miles to share our traditions of keeping our environment, our home, mother earth, keeping her alive and healthy. She is alive, she keeps us alive.

FITZGERALD: But it wasn’t just the Lummi who traveled great distances to be here. Indigenous activists came to Paris from New Zealand, the Amazon and the Arctic as well.

GOLDTOOTH: It’s key that we are here as indigenous peoples because we are the frontline communities. Our communities are the first ones to feel the effects of climate change.

FITZGERALD: Dallas Goldtooth is an organizer with the Indigenous Environmental Network in the United States. He says that indigenous peoples are nature’s best stewards, and they deserve an integral place in any climate deal.

FITZGERALD: When the kayaks reached the shore, indigenous leaders in traditional clothes crammed into the hull of a canal barge, where they spoke about the impacts of climate change on their homes and the need for native peoples to stand together against fossil fuel extraction. The Sarayaku people have been fighting oil drilling in the rain forests of Ecuador. Sarayaku leader Felix Santi presented a proposal he called the “The Living Forest” demanding recognition of their territory as sacred land, protected from oil, mineral, and timber extraction.

SANTI: [SPEAKING SPANISH]
[TRANSLATION] And this proposal respects all the living beings and helps achieve the balance of the planet and Mother Earth. Indigenous peoples live with this wisdom, live in harmony with these living beings, and we’re here to protect the lagoons and water and the trees and the mountains.

GEMMILL: We’re calling for a full phase out on fossil fuel development.

GEMMILL: And a moratorium. Keep it in the ground.

FITZGERALD: Faith and her people celebrated a victory earlier this year when Shell abandoned its plans to drill offshore in the Arctic.

GEMMILL: But immediately following that our state and our Congressional representatives called for drilling in the last five percent of America’s only Arctic coast, the Arctic National Wildlife Refuge, which is sacred to my people.

FITZGERALD: Faith says that indigenous people are doubly impacted by fossil fuels. The extraction often occurs on their land, and then they experience the worst effects of climate change.

GEMMILL: Climate change impacts our traditional livelihood and our ability to access our foods. The ground we walk on is literally melting beneath us. Whole communities are at threat of being climate refugees as they are being forced to relocate.


Many REDD/REDD+ climate solutions ignore the needs of indigenous peoples, their lifestyles and use of the land. (Photo: Emmett FitzGerald)

STAFFANSSON: The Saami are the indigenous peoples of the north, colonized by Norway, Finland, Sweden, and Russia. Our traditional livelihood is nomadic following the reindeer migration patterns.

FITZGERALD: Climate change has brought new species and strange weather to northern Europe, and it’s hindering the herders’ ability to follow the reindeer.

STAFFANSSON: My friend he couldn’t gather the herd because the lakes are not freezing and the rivers are still open. He can’t get over to the herd and the herd can’t come to him.

FITZGERALD: The Saami spend a lot of time out on the frozen lakes, and Jannie says the strange weather makes it difficult for them to predict how solid the ice will be at any given time.

STAFFANSSON: During the spring I hate when the phone rings because I’m afraid it’s bad news, somebody gone through the ice.

FITZGERALD: Jannie told her story many times here in Paris, but she says she didn’t feel like people inside the UN summit really heard her call to protect her people.

FITZGERALD: Indigenous activists in Paris want ambitious efforts to tackle global warming, but they’re concerned that some projects designed to rein in carbon pollution are being implemented without their permission, and violate their rights and undermine their livelihoods. The UN program REDD, Reducing Emissions from Deforestation and Forest Degradation, is intended to harness the carbon-sucking power of trees in the fight against climate change. But Berenice Sanchez, a food expert from Mexico, says that too often projects ignore the important role indigenous peoples play as stewards of the forest. She’s particularly concerned that some carbon sequestration projects are making it impossible for her people to live as they have for generations.

[TRANSLATION:] The implementation plans aren’t respecting traditional knowledge, or the methods people have used to care for these places. In Oaxaca, for example, what traditionally has been done is people harvest firewood to use in their homes. This is an activity that you can’t do anymore. It’s not our forest anymore.

FITZGERALD: Back at the water, a sign on the bridge reads NO REDD in bright crimson paint. Casey Camp Horinec of the Ponca nation in Oklahoma says you can’t put a dollar figure on a forest.

FITZGERALD: Indigenous activists lobbied hard in Paris for a strict requirement that countries protect the rights of indigenous people in any efforts to address climate change, but as of recording this, that language was removed from the binding text.

GOLDTOOTH: You know the nations of the world are concerned about legal liabilities, if they’re held accountable to recognize the rights of indigenous peoples, and so they would rather cut that put than put that in.

GOLDTOOTH: We’re on the edge here. We’re on the brink of extinction. It does not matter whether you are indigenous or not indigenous, we all stand on common ground literally. We need to protect it at all costs. The only way that we can keep the temperature from rising is to keep fossil fuels in the ground.

FITZGERALD: But that wasn’t on the table in Paris. The final climate deal won’t satisfy all the activists on the water, but Cheri Foytlin, a Cherokee Dene writer from Louisiana, says her spirits are still high.

FOYTLIN: You know what the best part about this is...just seeing all these amazing people stand up and say they’re going to take back their world.

FITZGERALD: Cherri says that indigenous people from across the globe paddling together through the center of Paris sends a powerful message that the movement for climate justice is growing.

FOYTLIN: The shift has been incredible and its just going to continue. Everybody needs to jump in line and get on the right side of history because history is happening and we will win.]

FITZGERALD: For Living on Earth this is Emmett FitzGerald in Paris.

NO REDD in Africa Network

Some REDD climate projects in the Americas