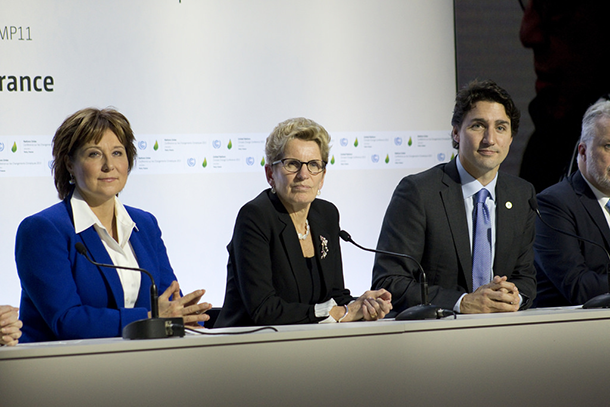 One promising carrot-and-stick method to cutting emissions is to put a price on them with a carbon tax or cap-and-trade system. Following the recent change of government, Canada is increasingly adopting carbon pricing within and beyond its borders. Host Steve Curwood talks with Quebec Environment Minister David Huertel about the provinces’ and country’s growing carbon policies.

CURWOOD: It’s Living on Earth. I’m Steve Curwood at the climate summit in Paris. In the crucial lead-up to these talks, countries were asked to prepare emission cutting plans or INDCS, and that focused negotiations much earlier than in previous rounds. The question now becomes, how do countries actually hit the targets they have set, which will only “ratchet up” in the coming years. One answer is a sort of bottom-up approach, with individual cities, states, and provinces making the changes necessary to help their nations meet the goals—and even reach across international borders. A good example of this is Canada.

Newly elected Prime Minister Justin Trudeau came to Paris to say that Canada is now backing federal and provincial climate protection, after a decade under conservative leader Stephen Harper who pulled out of the Kyoto Accord and championed oil sands development.

TRUDEAU: A lot of you may have noticed that over the past ten years of so Canada has been, perhaps less enthusiastic than some about addressing climate change and its impacts. But even though at the federal level we haven’t necessarily been strong and active at the subnational level our provinces have stepped up. We have four different provinces that represent about 86% of the Canadian economy that have actually moved towards putting a price on carbon.

TRUDEAU: We are now in a race to see who can be the most efficient. Who can create the best technology for renewable energy for moving forward in a way that understands there is no longer a choice to be made between what’s good for the economy and what’s good for the environment.

CURWOOD: And a key stimulant of green energy development, Trudeau says, is putting a price on carbon, which is well underway in several Canadian provinces. Quebec has been a leading Canadian province on carbon pricing, working with other provinces and even US states. To explain how this all works we turn to David Hertel, the Minister of Sustainable Development, the environment, and the fight against climate change for the Province of Québec.

HEURTEL: So we’ve set up a carbon market, which we've successfully linked to the one set up in California, creating the largest carbon market in North America, and we've been very successful at raising revenues. First of all, the carbon market has allowed us to raise close to a billion dollars in revenues on our way to our target of $3 billion by 2020, and that money is entirely reinvested in Québec's green fund which funds different adaptation and mitigation measures, for example, public transit, electrification of transportation, investment and renewable energy, energy efficiency research also and climate change impacts in Québec, and also the development of the whole clean tech sector so it's important to know that while we're fighting climate change with the carbon market because our carbon market is directly linked with our emissions reduction targets, this current market allows us to achieve those reductions but also is a tool for economic development to transition out of a fossil fuel-based economy to a cleaner economy.

CURWOOD: Without getting into too much detail, how does this work? If I'm in Québec, how am I being charged for the price of the carbon I use?

HEURTEL: If you emit...let's say you're the CEO of a major industrial company which emits more than 25,000 tons of CO2 per year, you are automatically by law integrated into the carbon market, and so if you want to continue to operate anything over 25,000 tons you have to acquire, you have to buy, carbon credits.

CURWOOD: And how much are those?

HEURTEL: The last auction, the price was set ultimately at $17 Canadian a ton, which is about $12, $13 US, and what's very interesting is that the price has been progressing. It started in 2013 at closer to $10 Canadian so now it's actually progressing and that's the basis of a successful carbon market because it creates the incentive for the private sector to change their ways because if a company buys carbon credits, and then invests in cleaner technologies then it can sell the unused credits on the open market and actually make money, and also it doesn't have to buy as many credits as it would've normally it had continued on the old way of doing business.

CURWOOD: So how does your subnational system, that is the provincial system, mesh with the others? You have a deal with California but at the same time there's a tax in British Columbia, I believe Manitoba is getting involved in this, Ontario I believe is also getting involved in this, and I imagine that the systems and the numbers aren't all exactly the same. How do you put that together?

HEURTEL: Well, we work at it, quite honestly. With California, it took several years, but we were able to harmonize our regulations and have a completely regulated system, which works and now Ontario has indicated not only that he wants to set up its own carbon market but it wants to link up with the Québec California model, so it's going to be one whole integrated system. Same thing with Manitoba. So were talking about one block.

The key here is that we first need all to establish a price on carbon to effectively fight climate change. I mean, we're here at the COP. I think it's something that enjoys a broad consensus. We need to establish a price on carbon, and what is interesting is that now while maybe five, six, 10 years ago, nobody was talking about carbon pricing in Canada, now you have five provinces looking at carbon pricing, representing over 80 percent of its population. So we're moving in the right direction, but I think also provinces have to put in place the right system for their economies, and for their population, for their particularities. And we can work together from that basis.

CURWOOD: You've looked over the border to the U.S. and California, what about the Regional Greenhouse Gas Initiative in the east coast of United States?

HEURTEL: So obviously that's very interesting market as well, nine US states all in the Northeast, including all the four border states with Québec. We've had very interesting exchanges, Premier Couillard has met several times with the governor Shumlin of Vermont, we're very cited by Gov. Cuomo in New York state in the recent announcement, I think it was in October and he announces intent of broadening the scope of RGGI and maybe eventually even looking, he specifically mentioned the Québec California market and looking if there wouldn't be any possibilities of linking up or collaborating. And there have been exchanges between WCI which is the entity which governs the Québec California market and RGGI to see if there could be some preliminary ways of aligning both markets, so that's very exciting news as well. Same thing on the west coast, Washington state and Oregon have taken significant steps and are interested in looking at establishing carbon pricing and eventually maybe carbon markets that could be linked with the Québec California model. Mexico has also showed interest. There was a MOU that was signed by Premier Couillard with the Mexican president on October 12 of this year which says specifically at both Québec and California will explore with Mexico the possibility of linking Mexico's carbon market which should be online by 2017 with the Québec California model. So as you can see, there's a lot of momentum, there’s a lot of things going on in the right direction, so it's pretty exciting time right now.

CURWOOD: What advice would you give to the United States based on your experience with carbon trading? People tend to say, OK, well right now it's unlikely a Republican Congress will do this, but times do change as you found yourself in Québec, so how would you advise the United States to proceed with dealing with the price of carbon if you were asked?

HEURTEL: Well, that's a pretty tall order. I think what we need to look at and if I can speak to the Canadian experience, I think if you look at the infranational level, so that's the state and local level, that's where the main jurisdictions are, the main powers are to affect real change, and we’ve seen it in Canada. It's the provinces, it's the territories and the cities that have forced the real change and put in place the real measures that we see now are working. So you don't necessarily have to wait for your national government to move.

CURWOOD: There are some who criticize carbon pricing as leaving the door open to burning more carbon. They said we should just shut it off. What you say response of those criticism?

HEURTEL: That has not been our experience. Quite the contrary, the setting up of the cap and trade system in Québec has helped us effectively reduce remissions and has effectively also help business transition out of fossil fuel-based technologies and develop new technologies. They factored in the cost and they see that there's actually opportunities for growth. Our economy now is positioning itself to be a leader in exporting these new technologies around the world.

CURWOOD: David Heurtel is the Minister of…

HEURTEL: Minister of Sustainable Development for the environment and the fight against climate change of Québec.

CURWOOD: Thank you so much for taking the time with me today.

HEURTEL: Great to speak with you. Thank you so much.

CURWOOD: And by the way, New York governor Andrew Cuomo has said that he would like to work with the Canadian provinces and California to develop a broad North American carbon market, using cap and trade. And for New York State to go beyond exchanging credits related to RGGI, it would have to create a state or regional cap and trade system itself.

The carbon tax, an idea with appeal

Cap and Trade vs. Carbon Tax