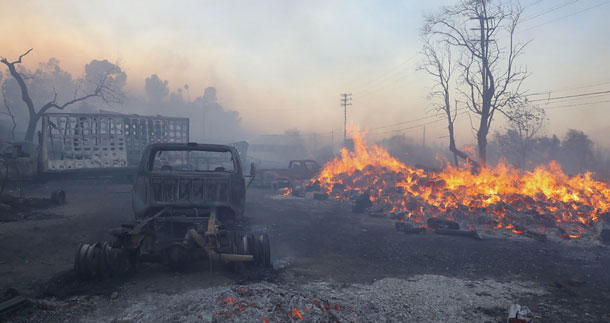 US natural disasters in 2017 cost $306 billion, the most expensive year since NOAA started keeping tabs in 1980. For a closer look at how the year's weather events resulted in such high damage costs, Host Steve Curwood turned to Kendra Pierre-Louis – a Climate Desk Reporter for the New York Times.

CURWOOD: From PRI, and the Jennifer and Ted Stanley Studios at the University of Massachusetts, Boston, this is Living on Earth. I’m Steve Curwood. NOAA – the National Oceanic and Atmospheric Administration – tells us America suffered a record amount of damage in 2017 from natural disasters, with a tab of more than 306 billion dollars. And to put that 306 billion in perspective, consider that it’s more than the interest on the US national debt, and twice the federal budget for health, Medicare, and education. Extreme weather hit almost every state this year: wildfires out west, Hurricanes Irma, Maria and Harvey in the South, and disasters that got less press coverage but still cost of over a billion dollars -- events like the Minnesota hailstorm and drought in the mid-west. Here to discuss these steep costs and how they relate to climate disruptions is Kendra Pierre-Louis from the New York Times Climate Desk. Welcome to Living on Earth Kendra!

PIERRE-LOUIS: Thanks, Steve. I'm so glad to be here.

CURWOOD: So, $306 billion dollars. Just how unprecedented is this figure record-wise compared to previous years?

PIERRE-LOUIS: Yes, it's record-breaking. The next closest disaster year was in 2005, and that was the year of Hurricane Katrina and that was $91 billion dollars less.

CURWOOD: Now, of course, we're not saying that climate caused all of this, but climate amplifies these disasters. 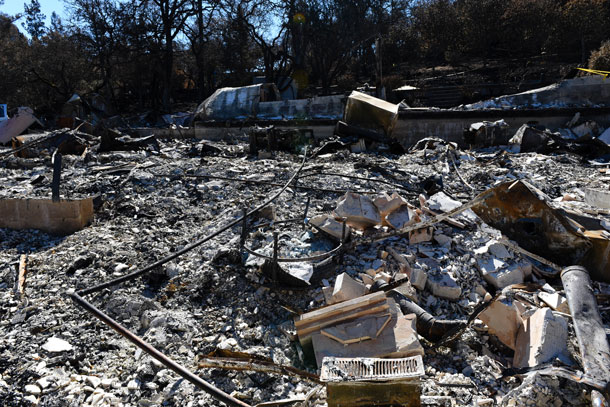 The aftermath of the Tubbs Fire, the most destructive wildfire in California’s history, which destroyed parts of Napa, Sonoma, and Lake Counties in the Northern part of the state. (Photo: David Welch, Flickr CC BY-NC 2.0)

CURWOOD: Now, what kinds of natural disasters account for the largest portion of these costs?

PIERRE-LOUIS: Hurricanes account for the largest portion of these costs, but it was also the most costly fire year on record as well. And then when you start digging into the data it's just the sheer number of incidences. When you go back to 1980 when they first started keeping records, there were only three natural disasters that topped a billion dollars. This year it was 16. The only other year where there were 16 events that topped a billion dollars was in 2011. So, what we're saying is it's not just that we're having severe weather events. We're having more of them.

CURWOOD: It seems that there are many disasters that cost a billion dollars or more that didn't surface in the national consciousness in a big way this year, but nonetheless had a fairly staggering impact collectively. Talk to me about some of those.

PIERRE-LOUIS: Sure, you have the Missouri and Arkansas floods and severe weather. That was $1.7 billion dollars. You have hail storms and high winds in Texas, Oklahoma, Tennessee...that was $2.6 billion dollars. One of the ones that I think did not get a ton of attention was the drought, for example, in South Dakota, North Dakota and Montana. And droughts are really tricky because there are so slow moving that we don't notice them. But for the farmers who it impacted, a lot of them like cattle ranchers, it caused them a tremendous lot of financial loss.

CURWOOD: Talk to me a bit more about how climate change may have aggravated all this damage.

PIERRE-LOUIS: Yes, so it was unusually warm across the country. NOAA came out with that release the same day they came out with the disaster data, and so it's a threat multiplier. A really good example is the hurricanes. The oceans were warmer than usual, so that warm water fed the hurricanes. The wildfires out west, California was wetter in the winter and then it was really really dry, so all of that moisture created a ton of grass that grew really quickly, then the grass died off because it was so dry and then when the fire started it fed on all of that dry grass, and so that was all amplified by climate change. 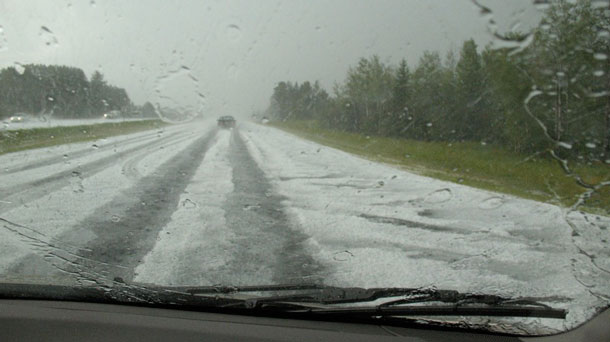 A hailstorm in Minnesota racked up $2.4 billion in damage for the state. (Photo: Stevesworldofphotos, Flickr CC BY-ND 2.0)

CURWOOD: And how does 2017 figure on warming ... on the warming record?

PIERRE-LOUIS: It's the third warmest year in the United States on record. The global data isn't out yet, but it should be out next week.

CURWOOD: So, things are really heating up.

PIERRE-LOUIS: Yeah, the Earth has a fever.

CURWOOD: How are insurance companies dealing with this? How much of the damage are they paying for?

PIERRE-LOUIS: A lot. This was a very expensive insurance year. It was the most expensive disaster year on record for insurers according to Munich RE, one of the world's largest reinsurers. They're recently the insurers of insurance companies. A lot of it was fueled by the disasters in United States, but there was also significant flooding in Asia. Obviously, what they're going to do is they're going to start passing those costs on to people. So, if you're living in places that are at high risk for flooding or high risk for fires, you're going to end up seeing increased costs because that's the only way that they're doing it. The one exception is in Florida because a lot of Florida flooding insurance and hurricane insurance is backed by the federal government. So, actually taxpayers are on the hook for those costs, and so there's going to be sort of a reckoning when it comes to Florida about how they handle the insurance.

CURWOOD: Beyond the bottom line, what kind of toll is this taking on people's psychological well-being? 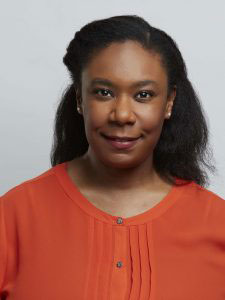 PIERRE-LOUIS: There was a study that basically suggested that when these kinds of disasters happens, it's actually really psychologically traumatic because not only do you lose your home in many cases, but you also lose your social connections, you don't have your neighbors, you don't have this breadth of support system. How you’ll deal with it really depends on whether it's the first time you've gone through this or if it's multiple occurrences. But basically it's really traumatic and that's ignoring, for example, the death toll rate. Like, if you've lost a loved one in one of these disasters that's obviously going to be even permeate even further.

CURWOOD: So, does it get worse the more times you go through it or do you become more resilient...you say, ‘Oh all right, here it is again.’

PIERRE-LOUIS: It seems like people get worse. The one researcher that I talked to that looked at the flooding in Lafayette, I believe in 2016, said that after the rains happened in Lafayette the children whenever it rained a little bit too hard, the children would freak out. They really thought they were going to lose their homes again, they thought the floods were coming back. They really didn't know how to deal with it.

CURWOOD: Kendra, what's the lesson that we should be taking from this?

PIERRE-LOUIS: The lesson is two-fold. The first is that we should be taking steps to reduce the amount of carbon emissions that we're releasing into the atmosphere so we can stave off the worst effects of these natural hazards. The other thing is we need to go deep into planning for the future, which is to accept that these kinds of occurrences are more likely to happen. When you look at Harvey in particular, we have people who are moving into flood zones, moving into places that were designed to flood and so it's hard to say that that's natural, right? We need to think really through in terms of where we are putting our communities and how we're planning our communities, so that we are more resilient when these kinds of weather events happen.

CURWOOD: Kendra Pierre-Louis is a Climate Desk reporter for The New York Times. Thanks so much for taking the time with us today.

PIERRE-LOUIS: Thanks so much for having me.

See how 2017’s disaster costs stack up to previous years