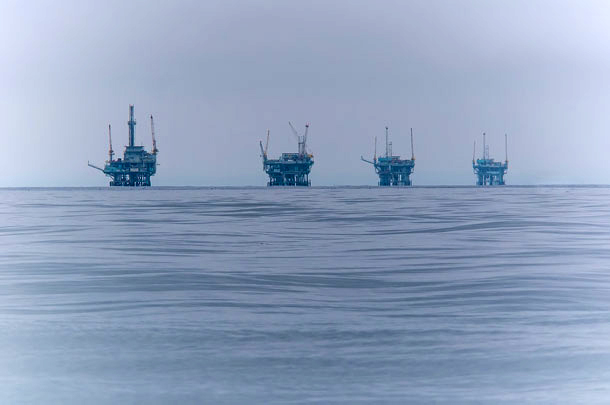 Oil rigs off the coast of California. (Photo: Anita Ritenour, Flickr CC BY 2.0)

The Trump Administration’s plans to open up nearly all the US outer continental shelf to offshore drilling drew sharp bipartisan criticism. When US Interior Secretary Zinke exempted Florida, lawmakers from several other coastal states then asked for similar treatment, but no answers so far. Steve Kretzmann of Oil Change International explains to host Steve Curwood about why there’s such widespread opposition to offshore drilling, and how it risks not only spills but also the health of the entire planet.

CURWOOD: New York City is the latest municipality to sue fossil fuel companies, seeking billions of dollars to address the rising seas and extreme weather that scientists link to global warming. But the Trump administration embraces fossil fuels, and when asked about the Paris Climate Agreement at a press conference with the Prime Minister of Norway on Jan 10th, Mr. Trump said the US is still out, claiming that it is important to support the present energy business.

Government leasing is key to the oil economy, and on Jan 4th, Interior Secretary Ryan Zinke moved to open up nearly all of the outer continental shelf for drilling. But now suddenly the waters off the coast of Florida are exempt, after Secretary Zinke spoke with offshore drilling opponent and Florida Republican Governor Rick Scott. Other governors, equally unhappy about potential drilling near their coasts, are now banging on the door as well, which is no surprise to Steve Kretzmann, the Founder and Executive Director of Oil Change International. Steve joins us now, welcome back to Living on Earth!

KRETZMANN: Thanks so much, Steve. Great to be here.

CURWOOD: So, Steve, who is speaking out against the plan and why are we seeing such bipartisan opposition to offshore drilling here?

KRETZMANN: Well, we're seeing the bipartisan opposition because people who actually live in these coastal communities understand that the oil industry is a threat to their way of life and to their economy as it's currently constructed, and you know, even Rick Scott and other Republicans understand that this is a problem and they are not going to benefit from an increased oil industry presence off of their coast. 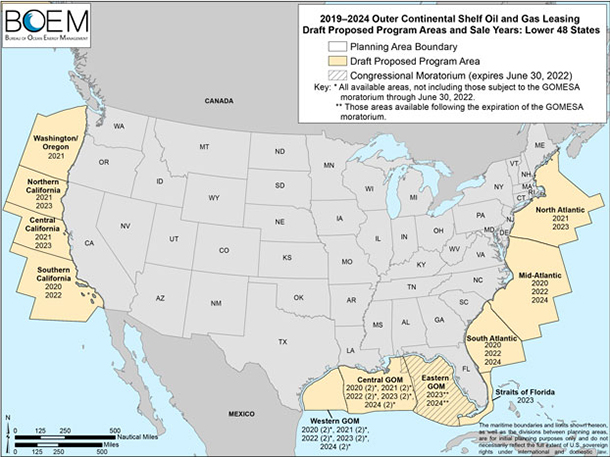 In its draft proposal of the 2019-2024 Outer Continental Shelf Oil and Gas Leasing Program, the Department of the Interior offered up virtually all of the outer continental shelf surrounding the lower 48 states for potential lease sales. (Photo: Bureau of Ocean Energy Management)

CURWOOD: Yeah, I gather – what the governors of New Jersey, Delaware, Maryland, Virginia, North Carolina, South Carolina, Oregon, Washington state, California, of course, are saying ‘no.’ We've had a partisan divide on many issues in this country, but I guess not on this matter drilling offshore. What's at risk of drilling offshore that so many of those folks are willing to stand up and say ‘no.’

KRETZMANN: Well, there's the ever-present risk of a spill and for anyone who has lived in close proximity to oil industry operations, it's a question of when, not if, a spill will happen, but there's also all the other things associated with oil industry operations which generally do not tend to help local coastal growth. In particular, they tend undermine it, be cyclical employees, employees coming in from out of state and in some cases out of country, and it's just not a really good basis for job growth and for economic growth for those areas which are not already deeply deeply indebted to the fossil fuel industry. 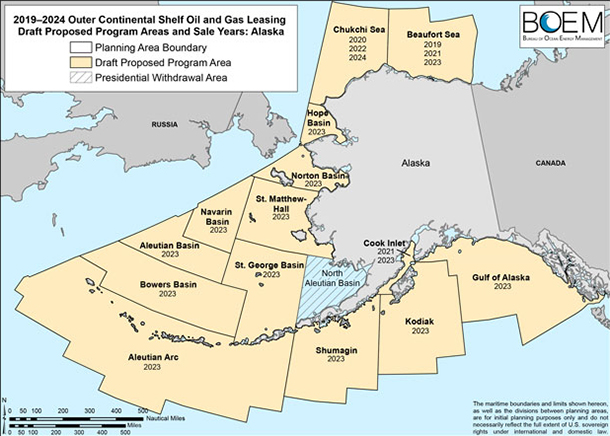 The Department of the Interior proposed 19 potential lease sales for offshore drilling in the waters off Alaska. (Photo: Bureau of Ocean Energy Management)

CURWOOD: So, what do you make of the fact that Florida is the only coastal state with these proposed leases that is being exempted at this point?

KRETZMANN: Well, it's funny because when I first heard this, before the exemption happened, I thought, ‘Well, that's interesting, Zinke and Trump just gave Florida to the Democrats in the 2020 election and 2018 midterms,’ and apparently Rick Scott and some others had the same thought because they quickly reversed it. I think it's – having worked in Florida on offshore drilling, I can tell you it is very much across-the-spectrum, uniting issue that nobody wants rigs off those coasts, and so I think it's not surprising to me that there was that pushback quickly. I think it's surprising frankly how quickly it happened, the fact that Zinke announced it in a tweet apparently without even consulting with his own bureau of ocean energy management, and industry is apparently upset today that they weren't consulted on this either. 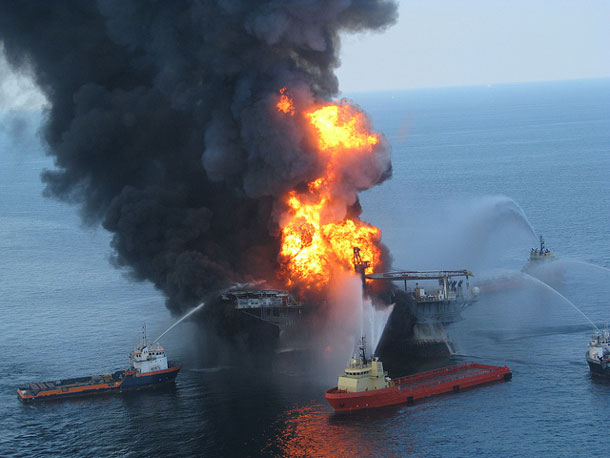 The Trump administration proposes to loosen regulations on blowout preventers put in place after the Deepwater Horizon disaster of 2010, which killed 11 people and spilled more oil than any other oil spill. (Photo: US Coast Guard, Flickr CC BY-SA 2.0)

It certainly also opens up a question of legality around the rest of the program overall. I mean it's pretty obviously a political decision to exempt Florida, so then, on what grounds are you choosing to exempt or not exempt the other coastal areas?

CURWOOD: What concerns you the most about this plan to open up so much of the US continental shelf to oil drilling? 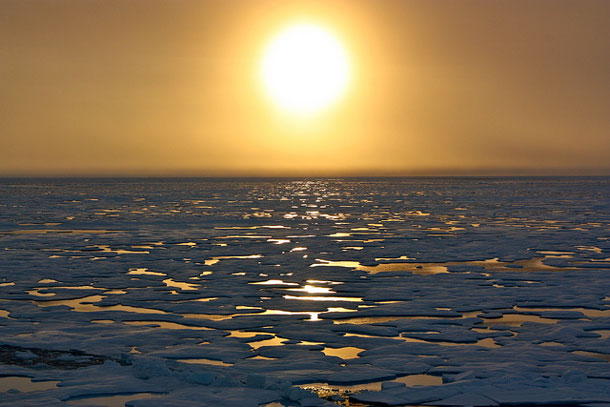 Earth’s “carbon budget” is dwindling, says Steve Kretzmann: The oil and gas reserves that are already in production have more than enough carbon to push the world past the goals set forth in the Paris Climate Accord in 2015. Above, melt ponds in the Arctic paint a picture of a warming world. (Photo: NASA/Kathryn Hansen, Flickr CC BY 2.0)

KRETZMANN: I mean, I think it's just another manifestation of the fact that this administration and this Republican controlled congress are really, literally pulling out all the stops on the fossil fuel industry. They're willing to offer everything that they can possibly offer to them. There's not a new oil subsidy they don't love, and there's not a regulation or community protection they don't hate, and you know offering up all of our coasts for the possible pollution and profit by the fossil fuel industry, by the oil industry is only the latest bit of that.

CURWOOD: And what concerns do you have about the climate connection to these leases?

KRETZMANN: So, from a climate perspective, as we have seen the World Bank acknowledge, as we have seen France acknowledge, as we saw this week in New York begin to acknowledge the expansion of the fossil fuel industry is completely out of step with where we need to be, and so we have enough carbon already in currently operating wells and mines around the world to blow past our Paris goals, to go beyond the two degree limit which is what we have internationally agreed. Now, obviously that doesn't matter to the Trump administration, but to the rest of the world it really does, and so we're seeing a big shift where the bar for climate leadership is really being raised and the newest most inspiring climate leaders are those who are going to stand up and say "no" to the fossil fuel industry and recognize there's an inevitable decline that has to happen here, an inevitable decline that we have to go through on production. 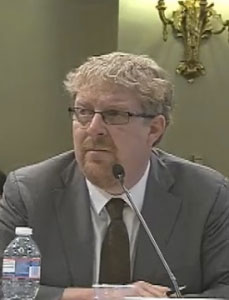 It doesn't mean, you know, the industry likes to characterize this as, oh my God you know everyone will freeze in the dark in our cars won't start tomorrow. No one's talking about turning off gas pumps or energy tomorrow. What we are talking about is recognizing that the climate science says in 30 years we've got to be done with this stuff. We've got to be essentially at zero and so we need to manage that decline, and expanding the axis of the industry is completely the wrong direction to go.

CURWOOD: By the way, Steve. Congress recently allowed a tax on oil companies to expire at the end of 2017. It was a nine cents per barrel tax that funded the oil spill liability trust fund to the tune of a half a billion dollars a year, basically there to pay for oil spills. How important was that tax and why do you think that it went away?

KRETZMANN: I think that tax was important because it's important that the people that are profiting from this pollution pay into the fund that's going to be used to clean it up. That said, that fund itself already had some unfortunate restrictions on it. Tar sands producers did not need to pay into it, and it was capped off at about a billion dollars per incident, which in a big oil spill goes pretty quick, actually. And so what this is an attempt to actually get the payments upfront from companies for the fact that inevitably we know that they're going to spill. Instead by limiting that tax, by ending that tax they're shifting the burden of the payment for those cleanup costs back to taxpayers.

CURWOOD: Steve Kretzmann is Executive Director and Founder of Oil Change International. Steve thanks for taking the time with us today.

KRETZMANN: Thank you, Steve. Always a pleasure to be here.


VOX”Florida got an exemption to the offshore drilling plan. Now 12 other states want one too”

Forbes: “Why Trump’s Offshore Drilling Expansion Won’t Be So ‘Yuge’”