Scientist Speaks Out On Perceived Bias in EPA Policy 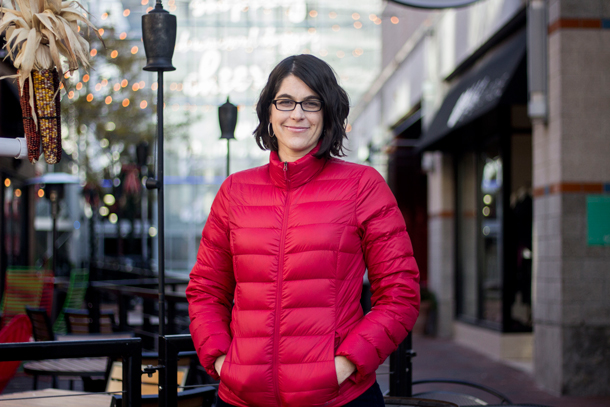 Robyn Wilson is an associate professor of risk analysis and decision science at The Ohio State University. (Photo: Ris Twigg / The Lantern)

Decision scientist Robyn Wilson of the Ohio State University was a member of EPA’s Chartered Science Advisory Board until late 2017, when a new conflict of interest policy from Administrator Scott Pruitt forced her to choose between her EPA grant and that board position. Wilson tells Living on Earth’s Jenni Doering why she chose to keep her grant, and why she’s concerned that the policy makes EPA’s science advisory boards more vulnerable to conflicts of interest, not less so, as Administrator Pruitt claims.

KAISER: We’re in for Steve Curwood. Now, the Environmental Protection Agency’s job is to safeguard Americans from harmful chemicals, pollution, unsafe water and other risks. EPA relies on its own scientists, and a small army of external scientific advisors, to review reports, and help inform potential rulemaking.

DOERING: Last year, in the name of preventing conflicts of interest, EPA Administrator Scott Pruitt adopted a policy that bans scientists who receive EPA grants from serving on these key advisory boards.

KAISER: That created a conflict for Robyn Wilson, an associate professor at The Ohio State University. She was a member of the EPA’s Science Advisory Board, until she was told to choose between her EPA grant and that position.

DOERING: Well, she chose her grant. And now two lawsuits are challenging Pruitt’s policy, and Robyn Wilson has signed on to one of them. She joins us now – welcome to Living on Earth, Robyn.

WILSON: Hi, thanks for having me.

DOERING: All right, so first, Robin, if you could please tell us a bit about what you study. I think it's risk analysis and decision making. How did that tie into what you did for the science advisory board that you worked on? 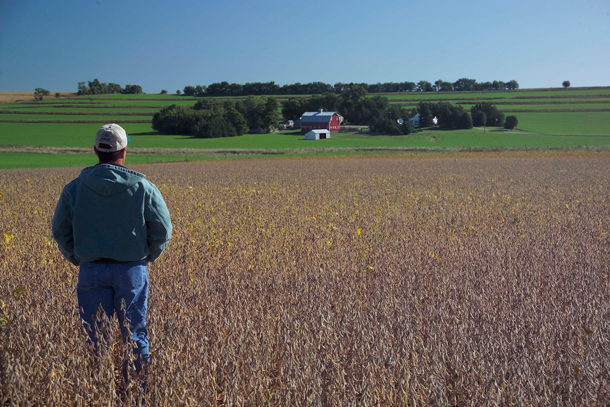 Decision science looks at how individual decisions can impact the environment. For example, Wilson studies how decisions made by farmers can impact water quality in Lake Erie. (Photo: United Soybean Board, Flickr CC BY 2.0)

WILSON: Right, so I believe...I don't...you don't really know exactly why you're invited to serve on these boards, but when I was contacted initially to serve on the EPA's chartered science advisory board, I kind of learned through that process that perhaps why I was selected to serve in that capacity was partially a function of my background and training in decision science and that that was something that the agency was trying to integrate more into the way that they do business. Decision science is one of those fields where we bring in a variety of different social science disciplines and we think about how best to, for instance, integrate science and values in decision making, how best to think about participatory decision making processes for challenges that are collective in nature, and then on top of that, the context that I happen to work in relates to landscape management and water quality. So, I do a lot of work in agricultural contexts, looking at how farmers make management decisions across big landscapes, largely in the Midwest and how that impacts water quality and other sort of collective benefits. So, I think they were also interested in having that expertise represented on the board.

DOERING: Yes, can you tell us a bit more about what the science advisory boards do? I understand there are a lot of different types of scientists on these boards too, right?

WILSON: There are, and so again I think it's kind of uncommon probably to have behavioral scientists. You don't see as much social science represented on the boards as perhaps you do economics, when it comes to thinking loosely about the kind of human dimensions or social science components of these problems. And then you see a lot of public health folks on those boards with backgrounds in toxicology and epidemiology. I was on the Chartered Science Advisory Board, which is one of two mandatory boards at the agency, and our job is really to think about the involvement of science and policy at a very high level. And so I served as a lead reviewer on a report where the agency was looking at the models that were used to set phosphorus reduction targets for Lake Erie, and we basically decide, “is this an accurate assessment of what the science says, is it communicated clearly?” so that decision makers or policymakers can use this information to make decisions. And so in that particular task, again, the agency wanted to have an understanding of how accurate were those models, could they be under or overestimating, what we actually need to do for the lake to improve; what would improve those models are there things that we are not thinking about that should be relevant to any sort of policy that would be set regarding the lake. 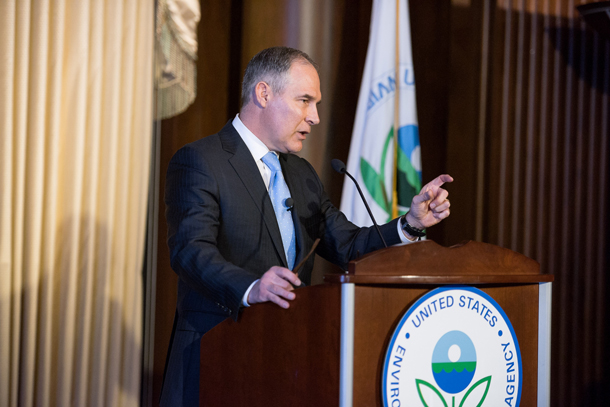 DOERING: Administrator Scott Pruitt says this new policy that bars scientists who receive EPA research grants from serving on its science advisory boards is meant to prevent conflicts of interest. So, how do you respond to that?

WILSON: One of my biggest critiques of that policy that he put in place this last fall is that we already have pretty extensive conflict of interest procedures in place. We had to go through government ethics training, then we annually have to submit a conflict of interest form where we disclose all of our financial interests, what we're working on research-wise, if we've testified on any issues, and then any time we are asked to review a report, we have to submit yet another conflict of interest form, so we have to say, is there anything specific related to this issue where I've been involved in some way that would prevent me from being able to give objective advice.

What's concerning for me is in this directive that Pruitt has put out there, that he's targeted it at university scientists. So, if you're a scientist working for government, you're exempted from the policy. In my research I work with a lot of people that work in county-level government. They receive funding from the EPA all the time, but apparently that is not a conflict of interest. Yet if I'm receiving funding often in much smaller amounts than some of those entities, that is a conflict of interest. And then on top of it, if you're working for industry, there are certainly interests that they are there to represent. What's unique about a university scientist, especially in the tenure system, is that, that's the point of tenure is that you should be able to say things that might be unpopular, that maybe people won't like, that might not be politically supported, right, by your local state or federal government, and we can't be fired for that. But I know plenty of people who work in the private sector and even in the public sector for the government, where they can’t speak out about those sorts of things. 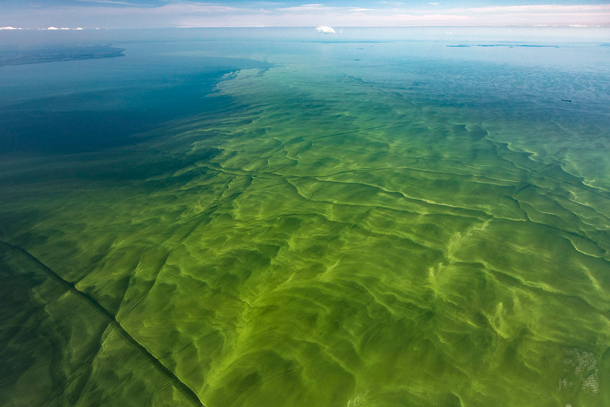 During her time serving on the Chartered Science Advisory Board, Robyn Wilson contributed to a review of an EPA report on the Lake Erie algae problem. (Photo: Aerial Associates Photography, Inc. by Zachary Haslick, Flickr CC BY 2.0)

One, they're not allowed to speak out in certain ways without a very formal review process, for instance, if you work in a governmental agency, and then in the private sector you could quite literally lose your job if you're out there doing things that aren't in the interests of that company. So, there's definitely in my opinion a much bigger potential conflict of interest in those sorts of settings than there would be for your typical university scientists.

DOERING: So, you decided to keep your EPA grant over staying on this science advisory board. Why did you make that choice and how difficult was it?

WILSON: It was very difficult, and the reason I made the choice really boils down to one thing, and it's that that was an interdisciplinary team grant and I didn't feel like I could bail, essentially, on the rest of my team. Had that just been a grant that I received personally, you know, returning the funding or turning down the funding, if that had only impacted me, I would have given it back, to be quite honest. I'm very busy. I have a lot of projects. I'm not - and I don't want this to come across the wrong way - but I'm not desperate for funding. But I play a specific, but small, role on this project, and I just didn't feel comfortable bailing on them without having a plan for how they would cover the piece that I was responsible for.

DOERING: Why are you speaking out publicly about this?

WILSON: It never occurred to me that I shouldn't. I'm at a university that's very supportive of their scientists. I'm at a position in my career where I can speak out. I know there are people who were similarly impacted by this directive, but were blatantly told by their universities they're not allowed to speak out about it. Typically as a scientist, when you see things that concern you that are going on in the -- in the policy realm, you kind of keep your head down, you do your science and you don't get involved, and if you're concerned you just show that concern as a citizen, right? You engage in that process as a citizen. So, this was again the first time I think in my professional career and especially over this last year as I've seen kind of science attacked over and over again by the current administration, this was the first time where I felt like I had the ability in my professional capacity to speak out about it. It felt like the one small thing that I could do.

DOERING: Robyn Wilson is an Associate Professor of Risk Analysis and Decision Science at the Ohio State University. Thank you, Robin.

WILSON: Thanks for having me.


The Washington Post: “‘Mr. Pruitt is welcome to officially fire me’ – as EPA carries out controversial policy, one scientist balks”

Robyn Wilson’s op-ed in The Hill: “Trump’s EPA replaced scientists with industry advisors under the guise of ‘conflicts of interest’”

About the EPA Science Advisory Board