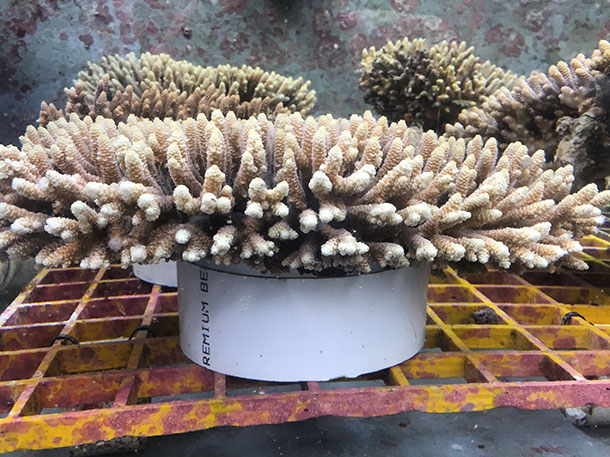 Acropora millepora coral, the focus of the study, spawn only once or twice a year during November under the light of the full moon. (Photo: Phillip Cleves)

Rising ocean temperatures are causing massive coral reef die-offs, and since the death of a third of the Great Barrier Reef in 2016, a worldwide call to arms has led to creative solutions. A team at Stanford University recently started using a genetic editing tool called CRISPR to identify the genes that make corals more heat-tolerant. Lead Scientist Phillip Cleves discusses with Host Steve Curwood how this research could help biologists focus their efforts on resilient corals.

CURWOOD: The warming oceans linked to climate change pose a huge threat for coral reefs, and in 2016 led to the death of nearly a third of the corals on the Great Barrier Reef. A quarter of all the fish species in the sea rely on corals for habitat, so die-offs aren’t just bad news for corals. Corals are tiny animals, and a team at Stanford University is studying how the genetic editing tool known as CRISPR can identify which genes help corals survive heat, so those more resilient species can be better protected.

Lead Scientist Phillip Cleves is here to discuss this new use of CRISPR technology. Welcome to Living on Earth!

CLEVES: Thank you very much. Happy to be here.

CURWOOD: Now, you conducted your study on the Great Barrier Reef in Australia. What's been going on with the coral reefs there?

CLEVES: Well, maybe this would be to some people a surprise that coral reefs worldwide are in danger due to rising sea temperatures due to climate change. It's estimated that in the past 30 years we lost about 50 percent of the world's reefs. Highlighting this kind of dramatic change is that in 2016, over the course of only a few weeks, we lost about 30 percent of the Great Barrier Reef due to abnormally high sea temperatures that the corals were not able to cope with.

CURWOOD: Indeed. So, tell me exactly what happens when you have rising water temperatures and they encounter corals.

CLEVES: So, when water temperatures get above what corals normally see in a region, they undergo a process called coral bleaching. And so one of the most amazing things about corals is that they have an algae that lives inside of their tissue, and the algae create energy from photosynthesis and give that energy to corals as food. And so, when water temperatures get one or two to three degrees higher than what they normally see, they expel these algae that are critical for their survival in these nutrient-poor waters. What happens is that when the corals expel these algae and they're not able to repopulate new algae, they can starve to death and die. And that's what's leading to this massive mortality.

CURWOOD: By the way, we noted a while back that there seem to be some corals in the Persian Gulf that are actually fairly tolerant of heat. So, this brings us then to genetics and obviously one question is, gee, what is in the genes of these Persian Gulf coral and the algae associated with them that is not elsewhere? And I imagine you're very curious about that. 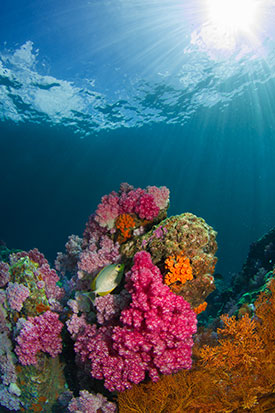 Coral reefs are vibrant ecosystems that cover less than two percent of earth’s surface and yet are depended on for survival by around a quarter of marine life. (Photo: Milos Prelevic on Unsplash)

CLEVES: I think that that's sort of the Holy Grail of the type of research that we're doing. We're really interested in trying to figure out what genes make corals more resistant – or less resistant really – to environmental stressors because we believe that understanding the basic science of that mechanism, we will then be more able to predict what's going to happen to the corals.

CURWOOD: So, to understand the genetics of coral you are using the tool CRISPR. Just briefly explain how it works in layman's terms for me.

CLEVES: CRISPR is a bio-machine, or a protein, that we can use to make very precise changes to the genomes of organisms. Having CRISPR-Cas9 has allowed us to explore gene function by editing the genomes of many many types of organisms that were previously intractable for these types of genetic studies.

CURWOOD: So, how exactly do you use CRISPR on corals?

CLEVES: Corals breed once a year by the full moon, and so in November in 2016, about a week or so after the full moon, corals will release eggs and sperm into the water column. And we collect the eggs and sperm, and we inject the eggs with CRISPR-Cas9 components to make changes in the DNA sequence that we were interested in. And the experiments that we did were generally a proof of concept to show that this technology could really be applied to corals. But it was kind of a tour de force because we had to be there when the coral spawn naturally during this one week in November induced by moonlight. So, it's kind of romantic in that way.

CURWOOD: [LAUGHS] Indeed. So, I gather that the CRISPR allows you to go in and just kind of break off the gene and see what it's doing or not doing.

CLEVES: Yeah, I think people sometimes make the analogy that it's sort of a genomic or genetic scissors where we can cut the DNA in certain places and replace it with very precise types of mutations. So, if we're interested in what gene X does, we can remove the function of gene X, or we can add more of gene X, to see what happens in the physiology of the animal.

CURWOOD: So, there's been some buzz about this concept of a so-called super coral, or genetically engineered coral that could be made to withstand heat. Where is your research along those lines? 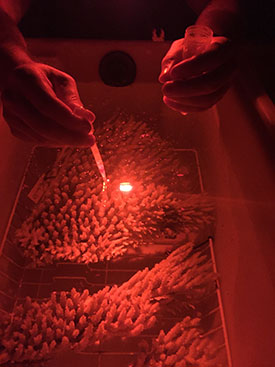 CLEVES: What we're learning, and what we think the best viable option for this concept of a super coral is finding natural super corals in the wild. And so, what I mean by a super coral is that maybe there are corals out on reefs that have a natural resiliency to global climate change. And we hope that using genetic tools like CRISPR to try to learn what genes are important for coral survival will allow us to eventually go through a reef and genetically scan individuals and find, okay, this coral, this coral, this coral, this coral are more likely to survive. And so, that's the ultimate goal, because evolution is doing the hard work of engineering super corals for us. And so it's likely that those corals are out there, and it's our job to figure out which ones they are and then focus our conservations to make sure that they have the highest chance of survival.

CURWOOD: So, just how risky is it to be manipulating the genes of a species?

CLEVES: [LAUGHS] That’s… and I would say that it’s risky to genetically engineer organisms if you release them out into the wild. And that's why we're explicitly not interested in doing that with corals, just because we don't really know enough basic biology to be sure that what we do is going to be viable. 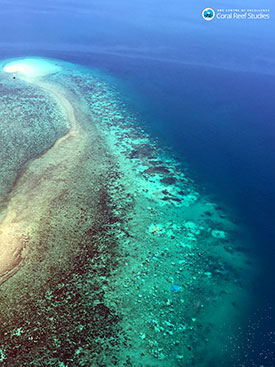 However, most of what we've learned about what genes do in our bodies, you know, the genetic mechanisms of diseases like cancer, were built strongly on the backbone of genetically modifying organisms. And so, that type of genetic research where you're doing it in the lab and you're not releasing them into the wild has a huge amount of benefit to what we can learn about how our biology works, and we think a comparable amount of progress can be made with doing similar types of work in coral.

CURWOOD: So, to what extent are we at the frontier? I mean, how new is this practice of using genetic modification to help a species survive?

CLEVES: It is really kind of a brave new world. Because tools like CRISPR has been really just used readily since 2013, we now can do experiments that we could never even dream of doing. It's been a gold standard in the coral field for decades to understand what genes give corals resiliency, and up until now we couldn't ask those questions.

CURWOOD: Phillip Cleves is a Postdoctoral Research Fellow at Stanford University. Thanks so much for taking the time with us today.

CLEVES: Thank you so much for having me on the show.

Time | "How Gene Editing Could Save Coral Reefs"