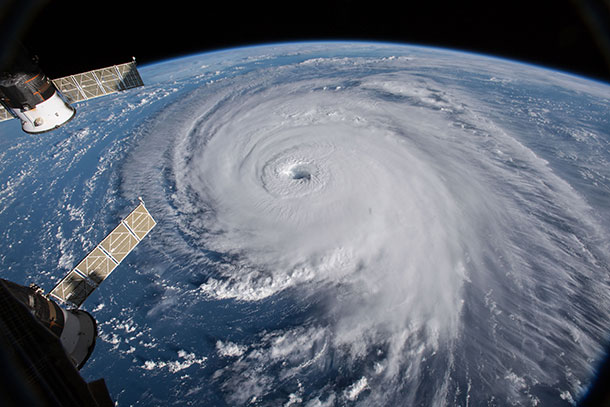 Hurricane Florence is one of many natural disasters that have affected the southeast barrier islands. (Photo: NASA Johnson, Flickr, CC BY-NC 2.0)

Peter Dykstra and Host Bobby Bascomb discuss the extra hardships that the Gullah and Geechee people, who are descended from slaves and live off the coast of South Carolina, face in the wake of Hurricane Florence. Then, they note the dangers of an alternative to BPA and take a look at how the removals of major hydroelectric dams can help struggling fish populations recover.

DYKSTRA: Hi Bobby. Let’s look at a piece from the website Citylab. They looked at an aspect from Hurricane Florence that a lot of people haven’t examined or even considered. We see plenty about the storm surge, the beach damage, in inland flooding, the power failures, the fallen trees. But there are an estimated 200,000 Gullah and Geechee people who live in the Southeast, mostly on barrier islands along the coast, and they don’t have all the legal paperwork to show that they own the land when they, out on the barrier islands, become some of the first victims of a hurricane.

BASCOMB: Why don’t they have the legal paperwork?

DYKSTRA: It’s happened over years – the Gullah and Geechees are descendants of slaves, the land has been handed down to them over generations, and the paperwork system that’s common in most places just never happened along the coast for the Gullah and Geechee people. And it makes for a real hard time when they go to apply for aid or loans from FEMA and other agencies in the wake of hurricane damage.

BASCOMB: Right, yeah, I can imagine that must be a really difficult situation for them.

DYKSTRA: And on the other side, even though those barrier islands are eventually going to be damaged beyond repair, and maybe even disappear from sea level rise and increased storms, there are still developers looking for that valuable coastal land, trying to buy the Gullah and Geechee people out, turning traditional land into golf courses and resorts. 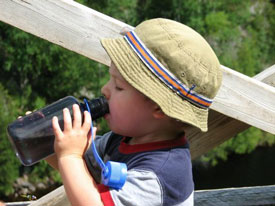 Bisphenol-A found in many plastic containers and water bottles is known to be harmful, but the substitute Bisphenol-S could be just as bad. (Photo: MMarsolais, Flickr CC BY-NC-ND 2.0)

BASCOMB: Yeah, golf courses and resorts that are going to be flooding in the coming decades. What else do you have for us, Peter?

DYKSTRA: Yeah, we go into supermarkets and you see lots of proclamations, marking pitches on packages that something is “gluten-free” or “98% fat free”. One of the increasing ones, in recent years, has been on plastic bottles and containers, saying that they’re “BPA-free”. Bisphenol-A, a substance that’s been found to mimic hormones, specifically estrogen, and play havoc with the human reproductive system.

BASCOMB: So, what’s going on with that now?

DYKSTRA: Well, there’s a researcher who’s been a pioneer in BPA research named Pat Hunt at Washington State University, and she and her team have found that BPA substitutes that are being marketed – there’s another one called bisphenol-S – may be just as bad, just as harmful, just as risky, as bisphenol-A, BPA.

BASCOMB: Man, well, back to the drawing board for that, then, I guess.

BASCOMB: Well, what do you have for us from the history books this week?

DYKSTRA: You know, it’s been over a century since hydrodams became a source of hydroelectric power in rivers all over the country, but the older ones have become obsolete as a source of power. One thing they’re still very effective at is blocking the progress of migratory fish.

BASCOMB: Right, fish like salmon need to migrate up rivers to reproduce.

DYKSTRA: Right, anadromous fish, the ones that live much of their lives in the ocean but come into rivers to reproduce. Not only salmon, but steelhead, shad, and sturgeon. And on September 23rd of 2011, on the Elwha river, in Washington state’s Olympic Peninsula, the process started to remove an obsolete hydrodam. This is one of the biggest such projects in the country.

BASCOMB: Right, we did a few stories about that back when the dam was being taken down. Do we know anything about how the river’s doing today?

DYKSTRA: The river’s doing pretty well. It’s hard to restore a river to its absolute pristine natural state, but the Elwha is recovering nicely, those anadromous fish are coming back, as they are in other places like the Penobscot River in Maine, where a mid-19th century dam was removed several years ago. 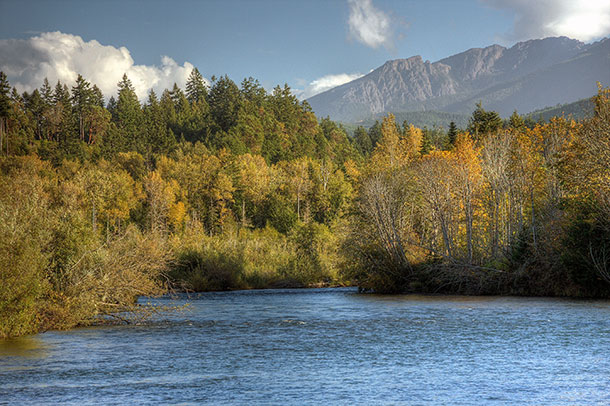 After the removal of the Elwha Dam, Washington’s Elwha River has begun a return to its former glory. (Photo: John McMillan, NOAA, Wikimedia Commons - Public Domain)

BASCOMB: Right, we did a story about that as well, actually. Well, thanks for those updates, Peter. Peter Dykstra is an editor with Environmental Health News. That’s EHN.org, and DailyClimate.org. We’ll talk to you again real soon.

DYKSTRA: Okay, Bobby, thanks a lot, talk to you soon.

BASCOMB: You can find more on these stories on our website, L-O-E dot O-R-G.


CityLab | “After Florence, the Gullah Could Face New Threats”

Living on Earth | “Undamming the Elwha”

Living on Earth | “Helping Fish Return to the Elwha River”