Palu, Indonesia, one week before the Tsunami hit, and again on the first of October, after the Tsunami devastated the area. (Photo: Courtesy of DigitalGlobe)

On September 28th, 2018, an 18-foot tsunami struck the Indonesian coast, killing thousands and stranding survivors without any kind of assistance. A system of buoys meant to monitor for tsunamis has been nonoperational for some time, and a new, more advanced system of underwater sensors was nixed just days before the tsunami reached land. Louise Comfort, one of the lead researchers in the development of these sensors from the University of Pittsburgh, discusses her project with Host Steve Curwood.

The death toll keeps rising from the tsunami that recently struck Sulawesi, Indonesia. The deadly wall of water was generated by a 7.5 magnitude earthquake off shore. The Indonesian government installed a system of 22 buoys to help detect pressure changes related to the formation of a tsunami, but they haven’t been functional in years. And a new system to be anchored to the ocean floor and less vulnerable to vandalism was awaiting the green light for deployment when it was rejected for lack of funding just days before the most recent disaster struck. University of Pittsburgh political science professor Louise Comfort worked with teams of researchers in the US and Indonesia to develop an undersea sensor network to detect tsunamis. Professor Comfort joins us now -- welcome to Living on Earth!

COMFORT: Thank you for having me.

CURWOOD: So, what are the challenges that Indonesia has faced in preparing for extreme events like tsunamis?

COMFORT: Indonesia is in a very risk-prone environment. 17,000 islands and counting. It has a major earthquake over seven-point magnitude on the Richter scale every year, at least every year. It is vulnerable also to tsunamis and volcanic eruptions, so this is a major challenge for the country.

CURWOOD: And of course, what little more than a decade ago there was a huge catastrophic tsunami event there in Indonesia. 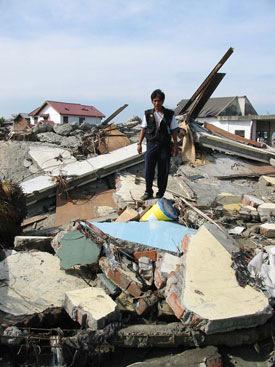 A man perched on a pile of wreckage after the tsunami in Aceh, Indonesia. (Photo: Photo RNW.org, Flickr CC BY-ND 2.0)

COMFORT: Yes, 2004 a tsunami at the tip of northern Sumatra, Banda Aceh, and literally one in three people in that city were killed. I was there two and a half months after the tsunami, but seeing the devastation and still it was the stench of dead bodies two and a half months... it's just sobering. And it's this kind of experience that has made me so intent on trying to do what is possible to support decision making for the public managers that face these horrifying situations.

CURWOOD: So, I understand that the proposal to get these sensors installed in western Sumatra stalled, in fact, just a few days before this latest tsunami hit. I guess it was due to funding concerns? How did you react when you heard that news?

COMFORT: I was profoundly disappointed, profoundly disappointed. So, there are two parts to this project one is the undersea network that provides the initial near real-time warning, and then the second is the network of the electronic devices, essentially cellphones, handheld cell phones that enable people in the community to communicate as they evacuate or move to safer ground. We had planned to do the deployment this fall September-October. The Indonesian agency, BMKG, was very interested in this proposal. Unfortunately, the project is currently on hold until more funding comes in.

CURWOOD: So, it's like that everybody agreed that people should wear seat belts, but there wasn't enough money for everyone to have one.

CURWOOD: As I understand it, there was a system of buoys there to warn people about tsunamis. What happened to them? 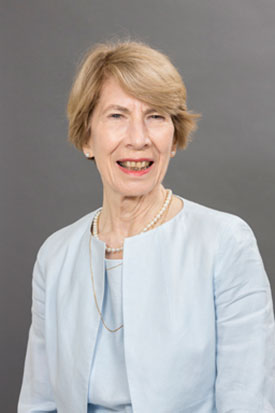 COMFORT: That's one of the painful parts of this project. Indonesia supported by the US and Germany had 22 buoys that were operating and designed actually to provide similar data from the ocean floor, a change in the water pressure in the water column. But those buoys actually had been vandalized and were not functioning, and as a matter of fact, the marine survey agency, BBPT, that manage the buoys, actually cancelled that program because they were not able to keep them operational. So, the buoys had not been operating since 2016.

CURWOOD: Now, what are the advantages of the system that you've helped to develop over this now defunct system of buoys?

CURWOOD: And of course, acoustic communication in the water is what the whales use.

CURWOOD: To what extent has the perspective now of the Indonesian government changed given this recent disaster?

COMFORT: Well, I hope it has changed. Right now, I'm certain that their full attention is on the immediate recovery, but I do hope that the agencies will reconsider this as a very important part of their overall tsunami early warning system.

CURWOOD: Louise Comfort is a professor at the University of Pittsburgh. Thank you so much for taking time with us today.

COMFORT: Thank you. It's been a pleasure.


NYTimes | "How to Help Survivors of the Indonesia Earthquake and Tsunami"

An archive of satellite imagery from before and after the storm