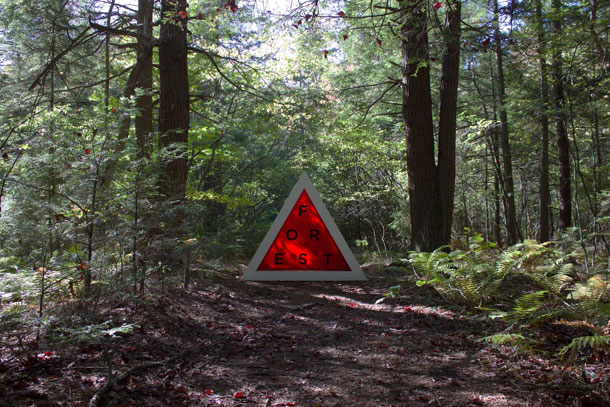 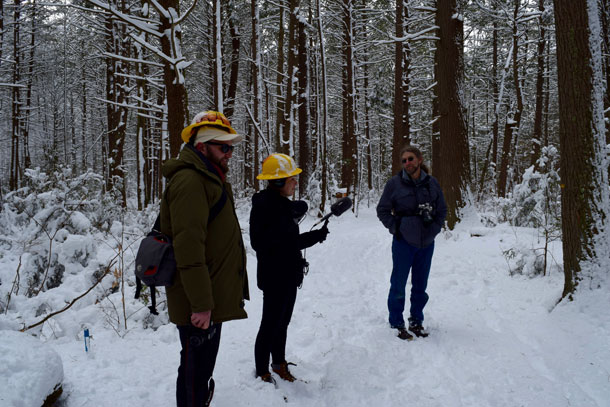 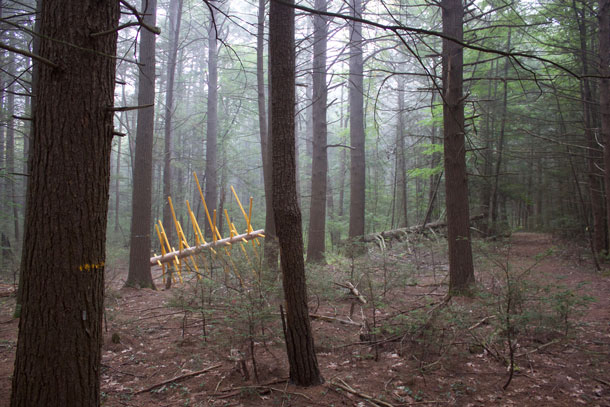 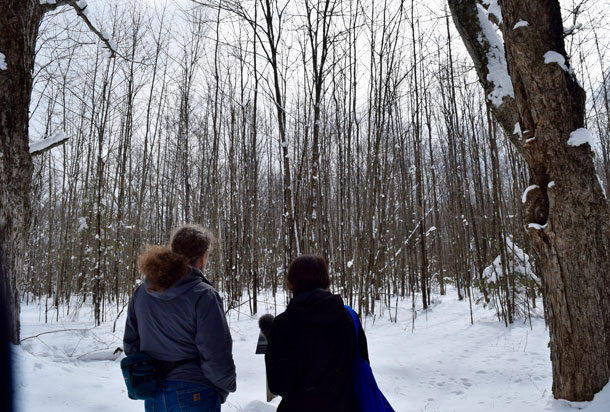 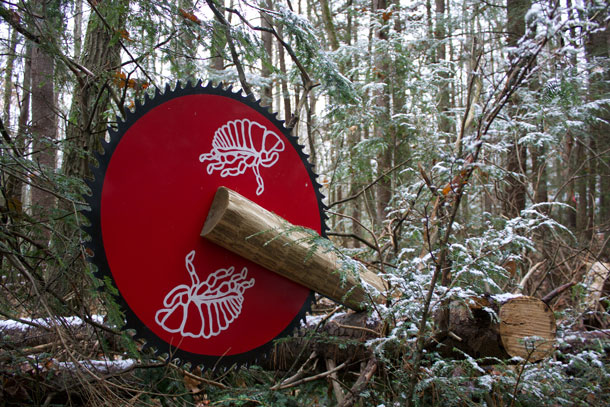 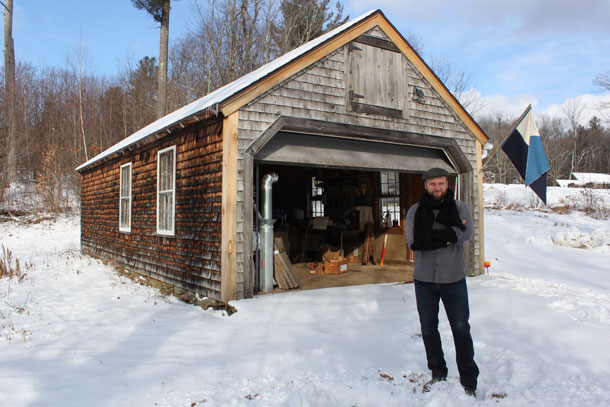 A novel science communication project called “Hemlock Hospice” is a collaborative work by Harvard Forest Senior Ecologist Aaron Ellison and artist David Buckley Borden. A series of installations along an interpretive trail in the 4,000-acre Harvard Forest in Petersham, Massachusetts relate the story of the vanishing eastern Hemlock tree. Climate change is spurring the Hemlock Wooly Adelgid, an invasive insect, to move further north, and it’s bringing down many Hemlock trees. Living on Earth’s Savannah Christiansen travelled there to talk to the team about the project.

CURWOOD: The Harvard Forest in Petersham, Massachusetts is known as the “wired woods.” It’s a hotspot for scientific research on topics ranging from soil warming to atmospheric carbon exchange. And now a researcher has created an art exhibit in the forest. The work, called “Hemlock Hospice,” is a joint effort between ecologists and artists to tell the story of losses among the Eastern Hemlock trees, once giants of the lumber business. Living on Earth’s Savannah Christiansen went to check it out.

CHRISTIANSEN: At first glance, the Harvard forest looks like a typical New England forest. Birds chirp in the branches above and the sun shines in a perfectly clear sky. But look more closely, and you notice all the hemlock trees are dead or dying. An invasive species is killing them off by sucking out their sap. Spindly, bare branches are strewn about the ground. And the decaying, gnarled trunks moan as they lean over one another. 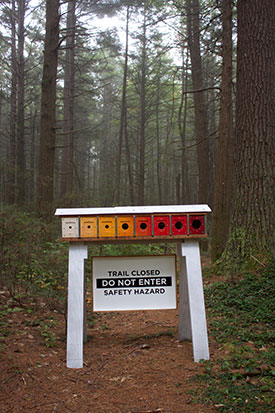 CHRISTIANSEN: This part of the forest houses an art installation project created by David Buckley Borden, the Harvard Forest’s artist-in-residence. The project is called “Hemlock Hospice.”

BORDEN: As most folks know, hospice care is end of life or end of term care. And it's designed to have a more dignified close to one’s life, but it’s also intended to benefit the living, so they can have a positive experience, as much as one can, when experiencing the loss of an individual or a species or an ecosystem.

ELLISON: Mostly, I study how ecological systems fall apart and then how they put themselves back together again.

CHRISTIANSEN: This ecosystem first fell apart more than 300 years ago.

ELLISON: This was an old growth forest when Europeans showed up in this landscape in the 1600s and early 1700s. So, you have big trees and very small people. And they didn’t have chainsaws, they didn’t have power tools, but they had a lot of strength and a lot of willpower to make it something that we could use. And they very assiduously cut down all the forest.

CHRISTIANSEN: Over time though, eastern forests, including hemlock trees grew back and today, there’s actually more forest cover in New England than there was in the colonial days. The hemlock’s modern troubles started in 1951, when an insect called the hemlock woolly adelgid was introduced in Virginia.

Aaron leads the way along a trail to see the artistic interpretation of the adelgid’s impact on the hemlock forest.

ELLISON: This is what we call “Insect Landing.” And it’s an abstraction in lots of different ways of perhaps an insect colonizing our forests, perhaps a spaceship. It's a yellow diamond with a white x in the middle of it and it's made from recycled materials. It's made from fence rails that would be around a porch on one of our houses that Harvard Forest has, it would have been salvaged from that. 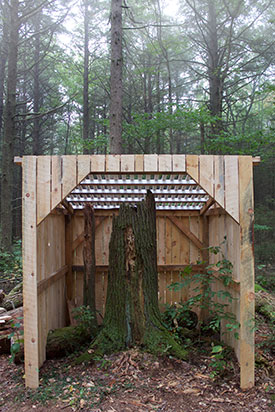 BORDEN: Well in terms of the narrative, this piece is really the prompt to talk about introduction of the insect. So, we talk about how the insect was introduced on nursery stock from Japan in the 50s and how over the course of the last 40, 50 years it slowly migrated north with climate change. You know, people often talk about climate change in terms of the big storms, rising tides, mega fires, and they’re all valid, but this is just as impactful, but it’s kind of a slow creeper, if you will.

CHRISTIANSEN: The adelgid has left a wake of dead hemlocks from Georgia to Maine, and will continue marching north as climate change creates new habitats for it. Already, its reached southwestern Nova Scotia.

CHRISTIANSEN: We keep walking, and find the next installation strung up high in the canopy between two hemlock trees.

BORDEN: So, what you see is essentially a stylized tent hanging about 30 feet in the air. On the side of it you would see about 12 to 13 states represented. And those are all the states in which the insect is now in, up and down the east coast.

CHRISTIANSEN: But Aaron says the tent holds a deeper meaning about the invasive insect.

ELLISON: When we use language like invasive species we are attributing agency to the insect or the plant or the animal that is invading. But in fact, it really doesn't have agency. The insect came on nursery stock that we imported. And then the insect does what any immigrant would do. It says I’m here, I’ve got to eat, I’ve got to have a place to live and a place to make a better life for my offspring. And so, for me it’s a good way to talk to people to get them to think about, well what are you really thinking about when you go after an invasive species or when you label something as an invasive species?

CHRISTIANSEN: Aaron says the installations are here to get both visitors and scientists thinking about these issues. Back in 2004, researchers tried to mimic the way adelgid kills hemlocks, to see how the ecosystem would respond.

ELLISON: So, we took chainsaws and knives, and we cut rings around the bark and into the wood to cut off the flow of sap. And in these two experimental plots, we killed about 2,000 trees in 45 minutes.

CHRISTIANSEN: The results are printed on the side of a woodshed. It’s a graph that reads “Lifeline of a Dying Hemlock.” The plummeting red and black lines depict the amount of sap running through a Hemlock trunk. 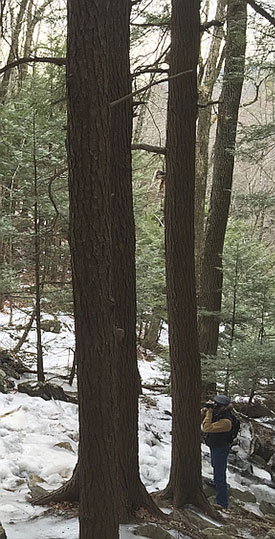 Aaron Ellison is the senior ecologist with the Harvard Forest. He is also an avid photographer and writer. (Photo: Flossie Chua)

ELLISON: And the graph that’s in front of us shows us the difference in sap flow between a tree that we didn't cut and a tree that we did cut. And it's just like watching an EKG of someone in the Intensive Care Unit as their heart rate goes down.

CHRISTIANSEN: And that got Aaron thinking about the ethics of his work.

ELLISON: I like to try and use this as a way to talk to my scientific colleagues about how you really have to think about what we are doing to the organisms we study. We killed these trees to understand how this forest will respond. We learn a lot by doing that. We respect what we're doing, we publish our data, that’s how it gets out. But we do have impact on our forests in order to understand this.

CHRISTIANSEN: As we come to the end of the walk, David and Aaron stop in front of one of the last installations. It shows the future of this forest: a mossy hemlock stump and next to it, a healthy black birch tree. Ecologists believe birches will one day replace Hemlocks here. These woods will change, and it won’t look like colonial settlement or the hemlocks’ death bed. But David and Aaron hope Hemlock Hospice will create a space for visitors to remember the Hemlocks long after the exhibit ends. For Living on Earth, I’m Savannah Christiansen in the Harvard Forest in Petersham, Massachusetts.