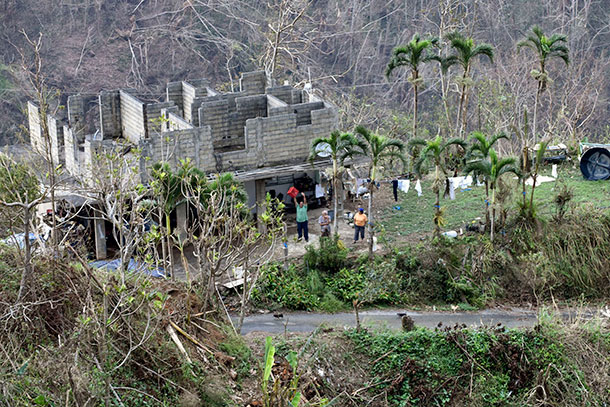 In 2017 Hurricane Maria knocked out so many trees and powerlines so that roads were blocked and supplies had to be air lifted into remote communities like this one near Utuado, Puerto Rico. (Photo: Coast Guard News, Flickr CC BY-NC-ND 2.0)

BASCOMB: It’s Living on Earth, I’m Bobby Bascomb. When Hurricane Maria made landfall, it knocked down trees and power lines, leaving roads impassable and communities isolated for weeks and months. Even towns in popular tourist areas found themselves cut off from the outside world and struggling to meet their most basic needs. Safe drinking water became one of the most immediate and pressing issues across the island, and also an important teachable moment.

BASCOMB: Rincón sits on the west coast of Puerto Rico. It’s a mecca for surfers and beachgoing tourists. The town has a quaint square with gourmet coffee shops and a lovely farmer’s market.

BASCOMB: Sonia Carlo has a farm stand at the market where she sells some salad greens, kale, and pineapple. She was on the farm with her husband and 3 children when Hurricane Maria struck. She says one of the biggest challenges was just providing the essentials for her children during and after the storm.

CARLO: And you know, they were just so scared that they weren’t going to be able to drink water. You know, it's hard to tell a three year old “don’t drink all the water, we're going to run out” or “don't eat too much food”. Yeah…

BASCOMB: But when their bottled water ran out, she found an alternative the kids liked even better.

CARLO: I had no choice but to give them soda. So they're -- you know, they're innocent, they said, “We like the hurricane! Mommy’s giving me soda and sweets!” Because, you know we had no choice, it was between letting them go thirsty or giving them, you know, soda -- which, they had never tried soda before. So…

BASCOMB: Eventually the soda also ran out, and Rincón didn’t get reliable drinking water for several months. In that time the incidence of water borne disease increased greatly. There was a sharp rise in gastrointestinal issues, scabies, and leptospirosis, a bacterial infection caused by fresh water contaminated with rat urine.

TOMAR: It really put into focus this water quality issue.

BASCOMB: Steve Tomar is originally from Florida but he’s been living in Rincón for more than 40 years. He’s tall and lanky with long brown hair and a gray beard. He says getting drinking water was a problem for everyone after the hurricane. 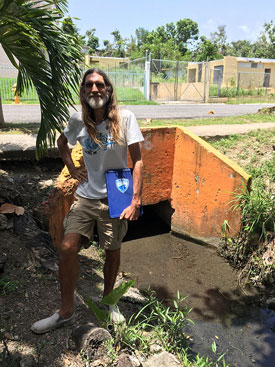 TOMAR: There is no water authority water, and the stores are closed because they don’t have generators. Or if they do have generators they sold out of water days ago. And you knew that it was going to be like that for months. So, you immediately had to resort to whatever your closest source of natural, what we call informal, sources of water were… springs, wells or streams.

BASCOMB: So, you come down here, you dip your cup in the stream and hope for the best.

TOMAR: Yeah, that was literally, for the vast majority of the island, that was it. Just hope for the best.

BASCOMB: And that presented a whole host of other problems. No one had any idea if water from those streams and springs was safe or not. But that was a problem Steve could work on. He’s vice chairman of the Rincón chapter of the Surfrider Foundation and director of the Blue Water Task Force, which tests ocean water quality near the beaches.

TOMAR: So, immediately after the storm people were going hey, can you do something about checking the wells and springs and stuff? And we said, well, we’re not set up for it but yeah, yeah we can do this. Within 3 weeks we could get up and running after the hurricane, as opposed to the government agencies – it was like 3 months at the earliest before they started responding.

BASCOMB: The only tests they had on hand were for enterococcus, a hardy bacteria that can survive in a marine environment, so that’s what they began testing for. After they were able to get the right supplies, they began testing the water for other, more likely, contaminants, including bacteria from fecal matter.

BASCOMB: I met Steve at a park near a small stream. Little bubbles from an underground spring pop up every few seconds.

TOMAR:This literally after the hurricane was where everybody that lived in downtown Rincón had to come for their water. This was the only source they had.

BASCOMB: So, Steve and his team began their testing here and quickly branched out to include much of the surrounding area. They gave an expedited training course to Boy Scout groups and anyone interested in learning how to do water quality testing. Within a few months they tested most of the informal water sources within a 6 hour radius. After 6 hours, a sample can no longer be accurately tested.

Today, Steve is testing this stream again. He repeats sampling every few weeks to monitor the bacteria count to be prepared for the next hurricane. He takes out a sterile 100 milliliter collection bag.

TOMAR: We very carefully remove the perforated top. And you do not throw your plastic into the environment. No, we have that problem already.

BASCOMB: He holds the bag by a yellow handle and dips it into the stream. Then he takes the sample to a bench under a shady tree. 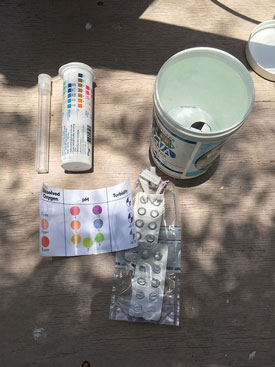 TOMAR: Here we are with our temporary lab set up at the site.

BASCOMB: He tests for ph, temperature, nitrates, chlorine and sediments, and writes down the results on a data sheet.

BASCOMB: Then he’ll take the sample back to his lab in the Surfrider office and test for the things that can really make people sick, including coliform, enterococcus bacteria, and E. coli. This particular stream has levels of enterococcus at twice the federal standard, enough to close a beach if this were a marine sample. But after the hurricane it was drinking water, so Steve’s team put up signs to notify people.

TOMAR: We had color-coded green, yellow and red signs. Boil for a minute, boil for 5 minutes, and boil for 20 minutes -- and quite frankly I wouldn’t be drinking it in the first place because if you’re finding that much bacteria you’re probably also going to have a lot of other, a whole suite of other problems that you wouldn’t want to use for potable water.

BASCOMB: Steve says in the past, they were reluctant to take on testing drinking water.

TOMAR: Because of course you’re stepping on all sorts of toes with various government agencies and the public health services, and blah blah blah…. After the hurricane that became a moot issue. And it was just like of course you do it, because this is the community. These are your people so whatever you can do to keep them healthy and informed, you do it.

TOMAR: In a lot of ways I think the major benefit of these community-based science programs is developing skill sets in the community. An educated populace is of course a populace that’s better able to take care of their own resources.

BASCOMB: Thay-Ling Perez is an intern with Surfrider and local to the area. She says that if there’s any silver lining here it’s the sense of community that came out of working together to get through the hurricane.

BASCOMB: As climate change continues to warm the oceans and create optimal hurricane conditions, big devastating storms like Maria are likely to become more common in the future. Puerto Ricans have painfully learned that the government was not able to quickly respond after a hurricane, so they’re looking to each other instead. And across the island, Puerto Ricans are learning the skills they’ll need to ride out the storm together.

BASCOMB: Since this story originally aired, studies have found elevated levels of nitrates in Puerto Rico’s waterways, likely a result of decomposed leaves and branches from the damaged forests. Nitrates serve as a fertilizer which can lead to algae blooms and fish die offs.